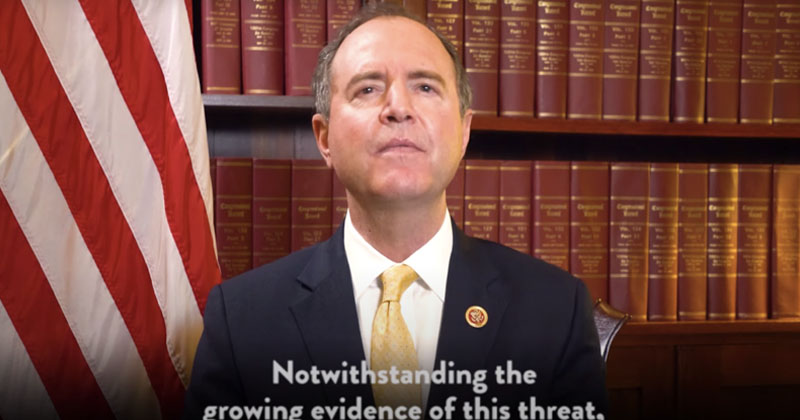 During the Democrats’ weekly address on Friday, Schiff said Trump’s attacks on mail-in-voting signal that he’s preparing not to accept the election results, which he says will end up “doing more damage than any foreign government could.”

“Doing all of these things and at the same time, Donald Trump may end up doing more damage than any foreign government could by refusing to accept the results of the election or allowing a peaceful transition of power. If this is his ambition, he will not succeed.’

“The President may try to tear down our democracy, but we will build it up. And come November, we will make sure of one thing – that Americans decide American elections,” he added.

Schiff’s remarks are the latest attempt by the Democrats to generate the narrative that President Trump will refuse to accept his “inevitable” reelection loss and will therefore have to be removed by force.

“If he loses and I expect that he will, then we have to be prepared for what he is going to do in the immediate aftermath of such a loss,” Holder continued, “and what he’ll do between the election and the inauguration of the next president,” Holder told MSNBC on Wednesday.

House Speaker Nancy Pelosi also said Trump will have to be “fumigated” out of the White House because he won’t accept the election results, and added she’s even attended Continuity of Government briefings in preparation.

“Whether he knows it yet, or not, he will be leaving,” said Pelosi on Monday. “Just because he might not want to move out of the White House doesn’t mean we won’t have an inauguration ceremony to inaugurate a duly elected president of the United States.”

Presidential loser Hillary Clinton – despite the fact she still hasn’t accepted her 2016 loss – also claimed that Trump “wouldn’t go quietly” if he lost the 2020 election.

“I think it is, um, a fair point to raise as to whether or not, if he loses, um, he’s going to go quietly or not, uh, and we have to be ready for that,” she said on Comedy Central earlier this month.

Ironically, a recent op-ed in The Atlantic confessed that Democrats have no intention of accepting the election results themselves if Trump wins.

Alex Jones breaks down Pelosi and other Democrats’ plan to overthrow Trump by claiming he won’t accept election results.