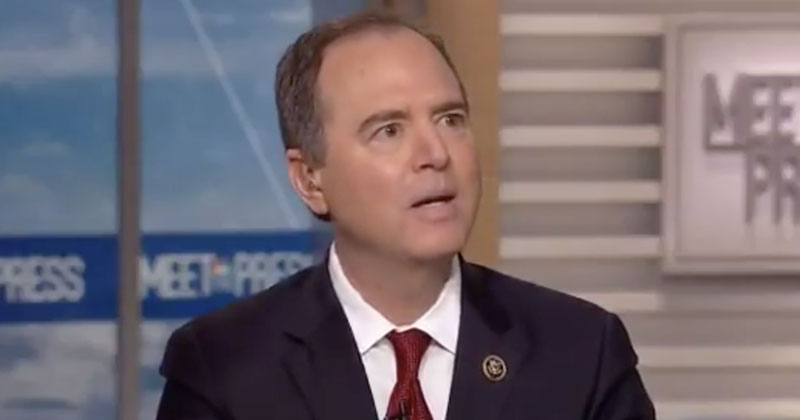 House Intelligence Committee Chairman Adam Schiff (D-Calif.) said he feels threatened by a tweet sent by President Trump alluding to legal punishment for him over dragging the country through the Democrats’ dangerous impeachment crusade based on lies.

“Shifty Adam Schiff is a CORRUPT POLITICIAN, and probably a very sick man. He has not paid the price, yet, for what he has done to our Country!” Trump tweeted Sunday.

Shifty Adam Schiff is a CORRUPT POLITICIAN, and probably a very sick man. He has not paid the price, yet, for what he has done to our Country!

Schiff brought up Trump’s tweet on NBC’s “Meet The Press” when host Chuck Todd asked about his Friday remarks warning that Trump would have Republican senators’ heads “on a pike” if they voted to convict him in the impeachment trial.

“I don’t think it was personal to refer to the CBS story. What may be personal, though, and I think I have to be very candid about this, is I made the argument that it’s going to require moral courage to stand up to this president,” Schiff told Todd.

EXCLUSIVE: @RepAdamSchiff: “Look at the president’s tweets about me today saying I should pay a price..”@chucktodd: “Do you take that as a threat?”@RepAdamSchiff: “I think it is intended to be.” pic.twitter.com/8KUqaoJcS3

“It is going to be very difficult for some of these senators to stand up to this president. It really is. There’s just no question about it,” Schiff continued. “I want to acknowledge that, and I don’t want to acknowledge it in a way that is offensive to them, but I do want to speak candidly about it.”

“I don’t think there’s any doubt about it, and if you think there is, look at the president’s tweets about me today saying that I should ‘pay a price,'” Schiff said, adding Trump was “wrathful and vindictive president.”

“Do you take that as a threat?” NBC’s Chuck Todd asked.

“I think it’s intended to be,” Schiff responded.

This comes after Trump’s legal team completely “shredded” Schiff’s case for impeachment on Saturday, which has cratered his credibility among Republican senators who the Democrats need on their side if they hope to convict Trump.

David Knight analyzes the lies of Adam Schiff in real-time during the Senate impeachment hearings.