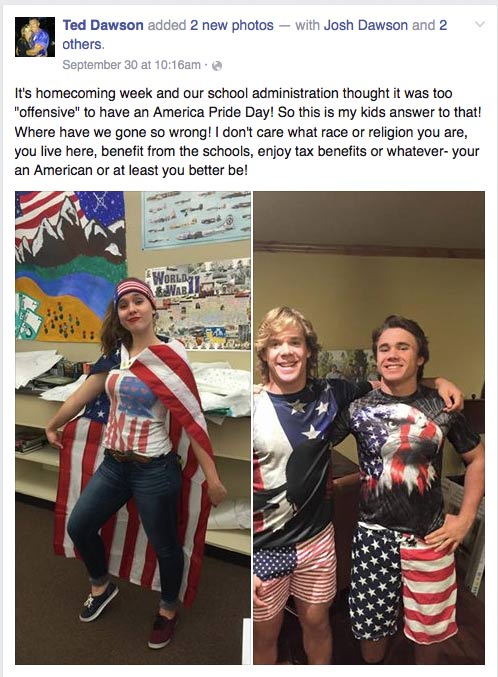 School administrators in Wyoming announced the cancellation of a 2015 “America Day” celebration last week after the event was deemed “offensive” and unsafe.

According to the Jackson Hole News & Guide, the homecoming tradition was banned after Jackson Hole High School Activities Director Mike Hansen alleged that multiple students “could have” felt targeted and singled out.

Local news speculated that the decision may have been linked to the school’s large Latino population, although no specifics were given by administrators.

A student survey revealed that those offended appeared to have a bigger issue with the word “America” than the celebration itself.

“Three times as many students indicated that they were not in support of selecting the title ‘America Day,’ ” Principal Scott Crisp said. “I’m charged with looking at a school with 660 kids, and I have to ensure that all those kids feel part of a student body.”

“Regardless of the name of the day, we want to ensure that activities of the week … bring our students together holistically as a student body.”

Despite the school’s decision, students went forward with the celebration anyway, showing up to class in American flag-clad attire.

“It’s homecoming week and our school administration thought it was too ‘offensive’ to have an America Pride Day! So this is my kids answer to that!” parent Ted Dawson wrote.

The incident in Jackson Hole is reminiscent of several other cases in which the mere mention of “America” or “USA” is labeled as offensive speech.

Schools in California went as far as to ban students from wearing American flag shirts during Cinco de Mayo in 2010, a decision later upheld by the Ninth Circuit Court after judges claimed the potential for racial violence by upset Hispanic students outweighed the First Amendment.