New York senator Charles Schumer is calling for no ride lists for Amtrak similar to the no fly lists currently used in the nation’s airports. 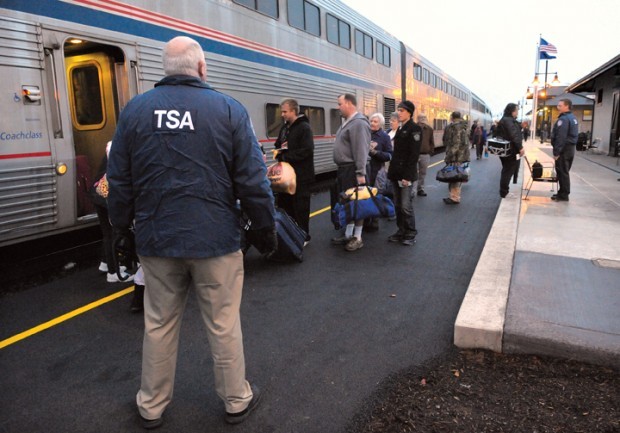 “Anyone, even a member of al-Qaida could purchase a train ticket and board an Amtrak train without so much as a question asked,” Schumer said. “So that’s why I’m calling for the creation of an Amtrak no ride list. That would take the secure flight program and apply it to Amtrak trains.”

Schumer issued his demand after the Pentagon supposedly gleaned information about terrorists attacks from Osama bin Laden’s home in Pakistan. The Department of Homeland Security sent an advisory to law enforcement officials around the country stating al-Qaeda discussed tampering with an unspecified U.S. rail track so that a train would fall off the track at a valley or a bridge.

Protecting the rail system in the United States would be virtually impossible. There is 140,000 miles of freight and passenger track in the country, not counting subway systems and light rail. In addition, there are 3,100 train and transit stations. There were over four billion passenger rail trips last year.

In October of 2002, the Electronic Privacy Information Center filed a FOIA to obtain information about the then secret no-fly list compiled by the Transportation Security Administration under the Department of Homeland Security. When the TSA failed to respond to EPIC’s request, EPIC filed suit in December 2002.

In late 2002 it was learned that the government used the list to prevent political activists from flying. In 2006, the TSA and the FBI agreed to pay $200,000 in attorneys’ fees for two anti-war activists who sued after they were told by airline agents at San Francisco International Airport that their names appeared on a FBI no-fly list.

In addition to targeting political activists, the lists are used to intimidate the public and acclimate them to the police state.

“What the ‘watch list’ or ‘no-fly list’ is doing is training Americans to submit to warrantless searches, to abandon their constitutional rights, and to submit to humiliation by thugs and bullies,” writes Paul Craig Roberts. “A Gestapo is being trained to have no qualms about searching and intimidating fellow citizens, using any excuse to delay or arrest them. Americans are being taught to use arbitrary power and to submit to arbitrary power.”

“I think the tighter we get on aviation, we have to also be thinking now about going on to mass transit or to trains or maritime. So, what do we need to be doing to strengthen our protections there?” said Napolitano, indicating that naked body scanners and invasive pat downs will eventually become a necessity in order for Americans to use mass transit.

The following month, Napolitano said her agency was looking at expanding its presence into hotels and shopping malls. She said the DHS has trained employees in Stasi techniques. “We look at so-called soft targets — the hotels, shopping malls, for example — all of which we have reached out to in the past year and have done a fair amount of training for their own employees,” she said.

Following a tidal wave of hype after the government claimed it killed Osama bin Laden – a claim made without evidence and accepted as fact by the corporate media – numerous law enforcement agencies around the country stepped up a militarized presence at airports, train stations, and mass transit hubs.

The corporate media is already hyping the supposed threat to mass transit, as the following video from a Dallas television station demonstrates: