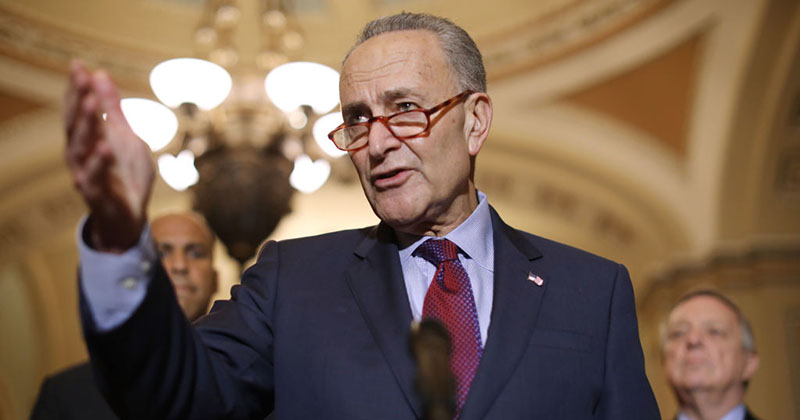 The Democrat majority’s legislative priorities in the House will fight to “let everybody vote – everybody,” declared Senate Minority Leader Chuck Schumer (D-N.Y.)

Schumer outlined House Democrat’s legislative priorities during a press conference on Wednesday, saying they would fight for “real reforms” to allow “everybody” to vote, and to not allow that to happen would be “despicable.”

“We’re going to fight for real reforms, to loosen the grip of special interests in Washington – and to let everybody vote. Everybody – not stand in the way of people voting, which is a despicable, despicable thing for people to do. It’s against the wellspring of our democracy,” Schumer said.

“We hope our colleagues in the House will have success in passing bills like this. We will be relentless here in the Senate in pressuring Senator McConnell and Republicans in the Senate to put them on the floor or pay the consequences.”

“The American people voted for Democrats last week on the strength of our ideas. Senate Democrats are committed to make those ideas a reality in this upcoming Congress.”

Several Democrat campaigns have already invited non-citizens to vote during the midterm elections.

“A complaint says the Texas Democratic Party asked noncitizens to register to vote, sending applications with citizenship box prechecked,” Abbott tweeted in October. “This is being investigated. If true, there will be serious consequences.”

A complaint says the Texas Democratic Party asked noncitizens to register to vote, sending applications with citizenship box pre-checked. This is being investigated. If true there will be serious consequences. #txlege #tcot #PJNET https://t.co/dgSPT8f77G

And the lawyers of Florida Democrat candidates Andrew Gillum and Bill Nelson objected to a court’s ruling that non-citizen votes would be excluded from the election process last week.

The National Voter Registration Act of 1993 (NVRA) requires individuals registering to vote in federal elections affirm that they are U.S. citizens. Failure to do so is a crime punishable under five federal statutes.