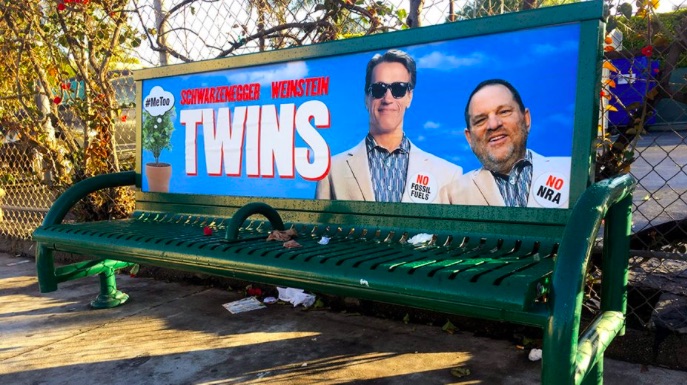 WASHINGTON, D.C. – Former California governor and sometimes actor Arnold Schwarzenegger declared his intention to sue “big oil” for first-degree murder, despite living a Hollywood lifestyle that is heavily dependent on the consumption of hydrocarbon fuels.

Schwarzenegger’s argument is dependent upon the scientific validity of the hard left’s ideological position that man’s consumption of hydrocarbon fuels is responsible for “climate change” – a position the hard-left adopted after the original proposition of “global warming” failed as scientific evidence proves otherwise.

In a stretch of logic, Schwarzenegger is basing his argument on a comparison to the tobacco industry that he argues promoted smoking despite medical research linking the habit to causing cancer – an argument dependent upon Schwarzenegger drawing an equivalence between “causing cancer” and “global warming,” aka “climate change.”

“This is no different from the smoking issue,” Schwarzenegger insisted in a Politico “Off Message” podcast during the South by Southwest (SXSW) festival held recently in Austin, Texas.

“The tobacco industry knew for years and years and years and decades, that smoking would kill people, would harm people and create cancer, and was hiding that fact from the people and denied it,” he continued. “Then eventually they were taken to court and had to pay hundreds of millions of dollars because of that.”

Schwarzenegger concluded: “The oil companies knew from 1959 on, they did their own study that there would be global warming happening because of fossil fuels, and on top of it that it would be risky for people’s lives, that it would kill.”

In his prediction of doom and gloom, Schwarzenegger calls to mind the type of climate catastrophes erroneously predicted by Al Gore in the 2006 documentary “An Inconvenient Truth,” that earned Gore millions of dollars despite the failure of his many dire predictions to come true.

In an expression of true Hollywood hypocrisy, Schwarzenegger boasts an estimated net worth of $300 million dollars, has owned a $23 million dollar mansion in Hollywood Hills, owns a fleet of expensive luxury cars, and travels typically by private airplane.

Politico further reported that at SXSW, Schwarzenegger confronted the #MeToo movement, addressing for the first time the charges of groping and inappropriate behavior that has surfaced from multiple women against him since the end of his first campaign for governor in 2003.

“It is about time. I think it’s fantastic,” Schwarzenegger told Politico.

“I think that women have been used and abused and treated horribly for too long, and now all of the elements came together to create this movement, and now finally puts the spotlight on this issue, and I hope people learn from that,” he said. “You’ve got to take those things seriously. You’ve got to look at it and say, ‘I made mistakes. And I have to apologize.’”

Schwarzenegger is still dogged by the history of secretly fathering a son some twenty years ago, with the family housekeeper and maid. Their child was 14-years-old at the time the affair was revealed, precipitating his wife Maria Shriver to file for divorce.

Fake posters copying the theme of “Twins,” a movie Schwarzenegger made with Danny DeVito some 30 years ago, have begun popping up around Hollywood, featuring Schwarzenegger wearing a button saying, “NO Fossil Fuels,” paired with now disgraced entertainment mogul Harvey Weinstein sporting a “NO NRA” button. 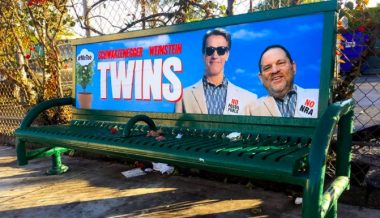 At the bottom of the fake ad is #MeToo and a tagline for the movie, saying: “Only their victims can tell them apart” – a “goof” on “Twins” that The Hollywood Reporter noticed, commenting that in the original film “Twins” Schwarzenegger “played a physically impressive, naïve and innocent man in search of his long-lost twin, a crooked womanizer played by DeVito.”