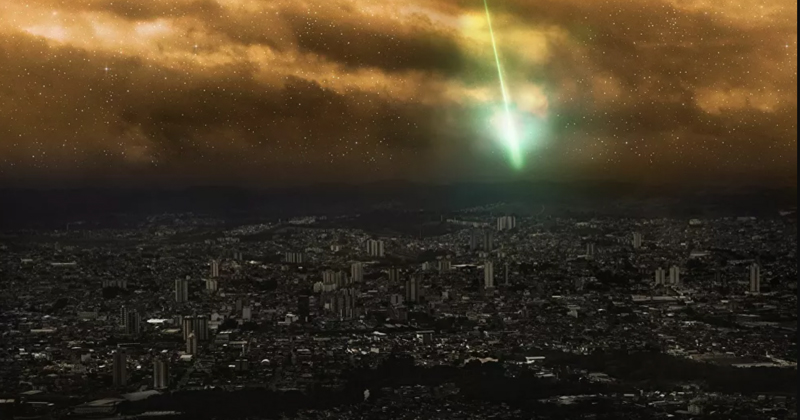 The researchers have made stunning conclusions, taking a profound look at traces of biological life in the inner structures of an ancient meteorite, which fell to Earth in an impact event in France in the 1860s.

Russian scientists have managed to spot purported evidence of life having been introduced to Earth from space, as they conducted tests on the traces of proto-bacteria found in the inner curves of an ancient meteorite.

As recounted by Alexei Rozanov, a senior member of the Russian Academy of Sciences and an academic supervisor at the department of astrobiology at the Joint Institute for Nuclear Research, the specialists will soon make public newly-taken high-resolution pictures of fossil microorganisms, which could have existed at the onset of the Solar system, that is, before the emergence of Earth.

The album with snapshots, due to come out in November, will be dedicated to the perfect variety of fossil traces found inside the ancient meteor of Orhei, which fell in 1864 in France. Specialists from the Paleontological Institute at the Russian Academy of Sciences have operated a high-precision electron microscope since 2015 to obtained a number of uncontested top-quality images which will make it into the final collection, co-authored by American astrobiologist Richard Hoover.

“This is not a discovery, but the actual establishment of a solid texture that proves the reality of panspermia – the theory of bringing life to Earth from space,” Rozanov emphasised.
“The pictures we have taken are easy to interpret, it’s hard to argue with them. However, disputes will certainly ensue. People who have never conducted such research are the most prone to arguing,” the expert noted, tongue-in-cheek.

The scientist stressed that many of the relevant conclusions were made back at the time of the meteor’s fall, with the researchers instantly noticing traces of organic life. However, people were understood to be scared then and interpreted the findings incorrectly.

Rozanov shared that organic traces could be found in all carbonaceous chondrites – namely in meteorites shaped from the original elements of the Solar system, or in those that had existed prior to this. The exact age of Orhei is unknown, but scientists believe it could be ancient.

As detailed by Michail Kapralov, the junior staffer at the radiation biology lab of the department of astrobiology at the Joint Institute for Nuclear Research, among the newly researched samples are those of fossilised magnetotactic bacteria, which could develop only on objects with a magnetic field and water, unicellular algae, as well fossils resembling acritarchs, protista etc.

“The minimum we have arrived at is that it has been known for 20 years that there exists, or at least existed, life in space.”

Many will suffer and die so that Governor Cuomo’s book coddles his fragile ego and hides the genocide he waged on thousands of elderly New Yorkers.