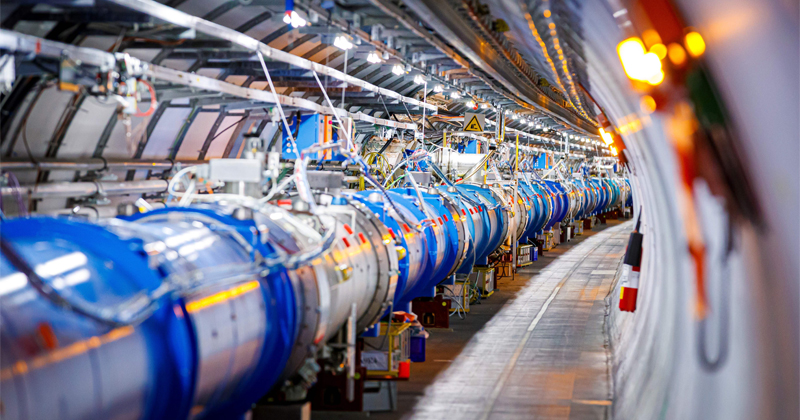 One of the greatest mysteries in astrophysics these days is a tiny subatomic particle called a neutrino, so small that it passes through matter – the atmosphere, our bodies, the very Earth – without detection.

Physicists around the world have for decades been trying to detect neutrinos, which are constantly bombarding our planet and which are lighter than any other known subatomic particles. Scientists hope that by capturing neutrinos, they can study them and, hopefully, understand where they come from and what they do.

But existing attempts are often expensive, and miss an entire class of high-energy neutrinos from some of the furthest reaches of space.

A new study published today in the journal Physical Review Letters shows, for the first time, an experiment that could detect that class of neutrinos using radar echoes.

“These neutrinos are fundamental particles that we don’t understand,” said Steven Prohira, lead author of the study and a researcher at The Ohio State University Center for Cosmology and Astroparticle Physics. “And ultra-high-energy neutrinos can tell us about huge parts of the universe that we can’t really access in any other way. We need to figure out how to study them, and that’s what this experiment tries to do.”

The study relies on a phenomenon known as a cascade. Scientists think neutrinos move through the Earth at almost the speed of light – billions of them are passing through you now, as you read this.

Higher-energy neutrinos are more likely to collide with atoms. Those collisions cause a cascade of charged particles – “like a giant spray,” Prohira said. And the cascades are important: If researchers can detect the cascade, they can detect a neutrino. Ultra-high-energy neutrinos are so rare that scientists so far have not been able to detect them.

That’s where Prohira’s research comes in: His team showed, in a laboratory, that it is possible to detect the cascade that happens when a neutrino hits an atom by bouncing radio waves off of the trail of charged particles left by the cascade.

For this study, they went to the SLAC National Accelerator Laboratory in California, set up a 4-meter-long plastic target to simulate ice in Antarctica, and blasted the target with a billion electrons packed into a tiny bunch to simulate neutrinos. (The total energy of that electron bunch, Prohira said, is similar to the total energy of a high-energy neutrino.) Then they transmitted radio waves at the plastic target to see if the waves would indeed detect a cascade. They did.

Prohira said the next step is to take the experiment to Antarctica, to see if it can detect neutrinos over a wide volume of remote ice there.

Radio waves are the cheapest known technology for detecting neutrinos, he said, “which is part of why this is so exciting.” Radio waves have been used in the search for the highest-energy neutrinos for about 20 years, Prohira said. This radar technique could be one more tool in the radio wave toolbox for scientists hoping to study ultra-high-energy neutrinos.

And having a greater understanding of neutrinos could help us understand more about our galaxy and the rest of the universe.

“Neutrinos are the only known particles that travel in straight lines — they go right through things,” he said. “There aren’t any other particles that do that: Light gets blocked. Other charged particles get deflected in magnetic fields.”

When a neutrino is created somewhere in the universe, it travels in a straight line, unaltered.

“It points straight back to the thing that produced it,” Prohira said. “So, it’s a way for us to identify and learn more about these extremely energetic processes in the universe.”

Dr. Francis Boyle joins The Alex Jones Show to break down the pandemic America is going to face as coronavirus spreads.