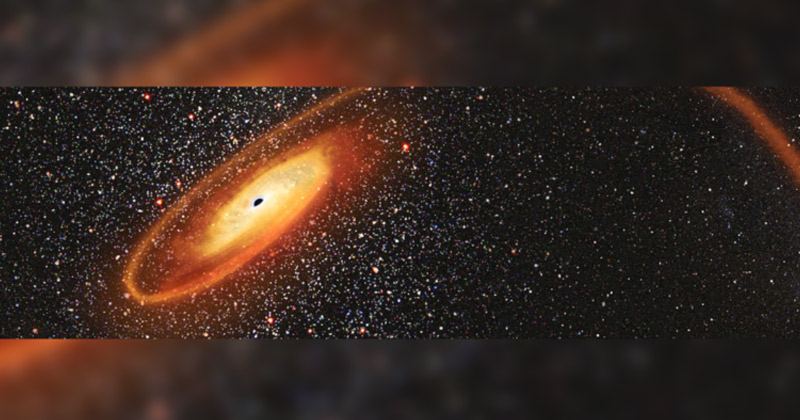 Scientists have unraveled an intergalactic murder mystery which gave them the best evidence yet for the existence of an extremely rare “intermediate-mass,” black hole, considered the “missing link” in their evolution.

Dacheng Lin of the University of New Hampshire, principal investigator of the study, and his team detected a powerful flare of X-rays, a cosmic ‘cry for help’, in 2006 but couldn’t quite track down the source to confirm what exactly happened.

After poring over a slew of hundreds of thousands of observations, the researchers found the victim; a wandering star had been violently ripped apart in the wrong part of town… erm, galaxy.

Following leads from NASA’s Chandra X-ray Observatory and the ESA’s X-ray Multi-Mirror Mission (XMM-Newton), the team enlisted the help of the eagle-eyed, master detective, the Hubble Space telescope, to track down the mysterious murderer.

Using the combined power of two X-ray observatories and NASA’s Hubble Space Telescope to catch the cosmic culprit while discounting “the usual suspects,” the researchers identified the X-ray source as 3XMM J215022.4−055108, a black hole 50,000 times the mass of our Sun, in a distant, dense star cluster on the outskirts of another galaxy.

This object is much smaller than the supermassive black holes found at the center of galaxies which are millions if not billions of solar masses, and thus opens up the possibility of detecting far more black holes of this hitherto unseen kind.

“Intermediate-mass black holes are very elusive objects, and so it is critical to carefully consider and rule out alternative explanations for each candidate. That is what Hubble has allowed us to do for our candidate,” Lin said.

Having caught one IMBH red-handed, Lin and his team plan to continue their cosmic detective work to solve the remaining mysteries of how IMBHs form, where they typically appear and what they might one day become.