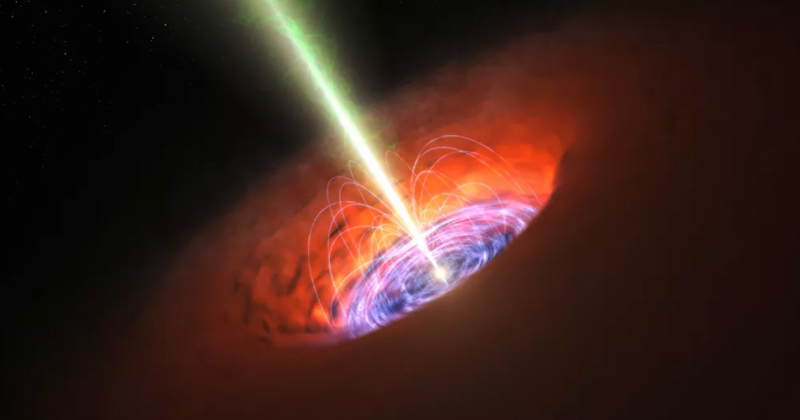 Blazars are a special type of active galactic nuclei (AGN) that are powered by a material – gas, dust, or stars – falling onto supermassive black holes.

But unlike regular AGNs blazars generate relativistic jets comprised of ionized matter that are pointed at us.

Scientists have discovered the world’s most distant and oldest blazar with its beam of radiation aimed directly at Earth.

According to researchers from the University of Insurbia, Italy the blazar called PSO J030947.49+271757.31 is located in a galaxy 13 billion years away from the Earth and it could possibly reveal details about the early evolution of the Universe and ancient black holes.

Their study was published on 9 March in the journal Astronomy & Astrophysics.

“Thanks to our discovery, we are able to say that in the first billion years of life of the Universe, there existed a large number of very massive black holes emitting powerful relativistic jets. This result places tight constraints on the theoretical models that try to explain the origin of these huge black holes in our Universe”, said astrophysicist Silvia Belladitta from the University of Insubria in Italy and lead author of the study.
Scientists say the venerable age of the blazar means it existed less than a billion years after the Big Bang. Researchers detected this after combining data from several telescopes. Despite PSO J030947.49+271757.31 being so far away, scientists were still able to detect it because it is incredibly luminous. What is more, it is humongous. According to scientists, the blazar is about a billion times more massive than the Sun.

They note that with the advent of a new generation of land and space telescopes there will be more thrilling discoveries about blazars.

Powerful Bowne Report breaking down the latest on the coronavirus outbreak.