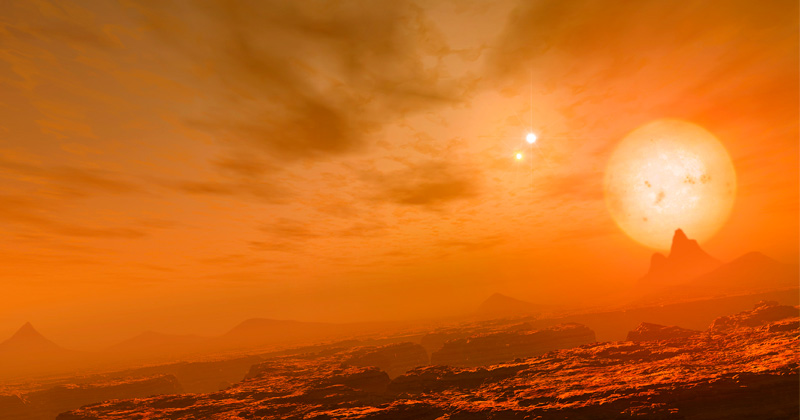 A scientist at the Center for Astrophysics | Harvard & Smithsonian has announced the discovery that mass in triple star systems takes on the characteristics of recipient stars before mass is actually transferred, which may allow scientists to re-examine previously labeled binary star systems for evidence of a third companion.

“Scientists already knew that the transfer of mass from one star to another is one of the most important processes in astronomy, because it produces events that release tremendous amounts of energy—from Type Ia supernovae to the merger of black holes. I wanted to extend this to understand what happens if one star transfers mass to a pair of stars,” said Rosanne Di Stefano, astronomer at CfA. “To do that I had to generalize the familiar process of star-to-star mass flow.”

Di Stefano suggests that the flow of mass is similar to the flow of water through a faucet. “The mass-giving star takes on a tear-drop shape, filling its ‘Roche Lobe’ and transferring mass through a small region called the L1 point,” said Di Stefano. “The Roche Lobe and the L1 point provide a mathematical basis for computing exactly what happens to transferred mass in a binary where both gravity and rotation influence the flow of matter.”

“In triple-star systems, instead of a fixed position with respect to the rotating stars, like we see in binary systems, the L1 point executes an orbit over a three-dimensional surface, and the shape of the Roche Lobe pulsates in a periodic fashion,” said Di Stefano. “This means that mass is pulled away from the donor star with its motion already imprinted with the periodicity of the inner binary, even though it has yet to travel to that binary, and the visual outcome looks much like an elegant, yet explosive Pas de trois.”

Followup revealed that the pulsation also had the effect of increasing the rate of mass flow, with a stunning outcome for discerning observers. “If the inner binary consists of stellar remnants, the high rate of mass flow can make these systems among the brightest X-ray sources in galactic populations. This suggests that X-ray astronomers may be able to identify mass-transfer triples,” said Di Stefano. “But what’s really exciting is that this new ability to identify triples in X-ray may allow us to discover that some systems previously thought to be X-ray binaries are actually a new class of star system: an X-ray triple with mass transfer from the outer star to an inner binary.”

Di Stefano’s work is published in the Monthly Notices of the Royal Astronomical Society, and is accompanied by a dynamical simulation by Sophie Schroeder, Niels Bohr Institute, and Morgan Macleod, Institute for Theory and Computation at CfA.