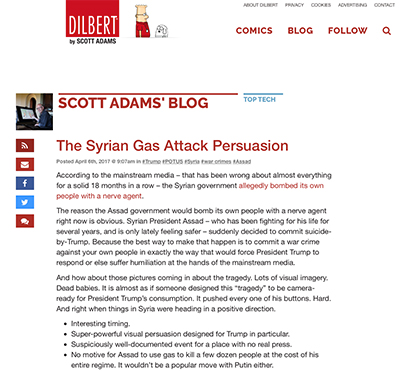 “I’m going to call bullshit on the gas attack. It’s too ‘on-the-nose,’ as Hollywood script-writers sometimes say, meaning a little too perfect to be natural,” he said. “This has the look of a manufactured event.”

“My guess is that President Trump knows this smells fishy, but he has to talk tough anyway.”

Adams pointed out that Syrian President Assad, who’s finally regaining territory from ISIS after six years of bloodshed, has absolutely nothing to gain from launching a gas attack which his political enemies in Saudi Arabia and the West could use to justify his overthrow and execution.

“Assad – who has been fighting for his life for several years, and is only lately feeling safer – suddenly decided to commit suicide-by-Trump,” he added. “Because the best way to make that happen is to commit a war crime against your own people in exactly the way that would force President Trump to respond or else suffer humiliation at the hands of the mainstream media.”

“And how about those pictures coming in about the tragedy. Lots of visual imagery. Dead babies.”

Adams also said the “attack” was suspiciously similar to the fake WMD stories coming out of Iraq before Bush’s 2003 invasion, and the gas attack itself, which occurred in a war-zone with little to no press, was too well-documented with video and photos.

“So how does a Master Persuader [Trump] respond to a fake war crime? He does it with a fake response, if he’s smart,” he concluded. “The longer he drags things out, the less power the story will have on the public… we’ll be wondering for weeks when those bombs will start hitting Damascus, and Trump will continue to remind us that he doesn’t talk about military options.”

“It looks like maybe somebody didn’t like that so there had to be an episode,” said Paul, asking, “who benefits?”

“It doesn’t make any sense for Assad under these conditions to all of a sudden use poison gases – I think there’s zero chance he would have done this deliberately.”

His son, Sen. Rand Paul (R-Ky.), reminded President Trump he was against military action in Syria in 2013 when Obama demanded the overthrow of Assad.

At the time, Trump wrote “what will we get for bombing Syria besides more debt and a possible long term conflict? Obama needs Congressional approval.”

What will we get for bombing Syria besides more debt and a possible long term conflict? Obama needs Congressional approval.

Sen. Paul dug up that tweet, commenting “this remains true today as it was in 2013. Both parts.”

This remains true today as it was in 2013. Both parts. https://t.co/sRQkcZ0oDI

As Infowars reported on Wednesday, the White Helmets, a al-Qaeda affiliated group funded by George Soros and the British government, reportedly staged the sarin attack on civilians in the Syrian city of Khan Shaykhun to lay blame on the Syrian government.

“Unsurprisingly, the mainstream media and neo-con politicians have been quick to regurgitate the al-Qaeda-linked rebels version of the events before any investigation takes place,” reported Mimi Al-Laham.