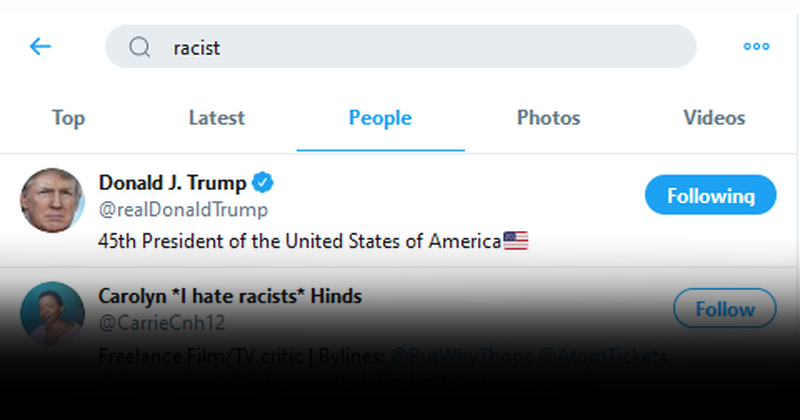 For some strange reason, when one types the word “racist” into Twitter’s people search, Donald Trump is the top result – a discovery made days after Trump took action against biased social media platforms.

According to The Independent, Twitter search results are affected by the data they collect on you – including political leaning and your interests, however their search of the word in a private browsing session using Brave browser was the same on both iPhone and Android app.

Owen reveals the foresight of the late Booker T. Washington who warned of those with an agenda to manipulate the black community.

Other users on the social media site have reported the same result.

It is not immediately clear why Twitter’s search algorithm promotes the result. Other results in the “People” section when searching for the word “racist” include accounts who have mentioned the word in their display names, such as the “Yes, You’re Racist” account which raises awareness of racial issues. –The Independent

While unclear how long this has been going on, the discovery comes just days after Trump signed an executive order which chips away at the “liability shield” contained within Section 230 of the Communications Decency Act of 1996, which protects neutral social media companies from being sued over content posted by their users. Last week Rep. Matt Gaetz (R-FL) told Breitbart:

A lot of people don’t see that Facebook and Twitter … you see Twitter disadvantaging the president, they enjoy liability protections that are not enjoyed by your local newspaper or your local TV station, or Fox News, or CNN, or MSNBC. They have special benefits under Section 230 of the Communications Decency Act as digital platforms because they’re not creating content for which they should be liable. They’re not making decisions about content, they’re simply saying come one, come all with your content. And as a consequence of that, they’re getting a bunch of protections.

This isn’t the first time Silicon Valley has deemed themselves the arbiters of information.

After they were busted trying to help Hillary Clinton in the 2016 election – and were beside themselves after she lost, Google employeesdiscussed whether to bury conservative media outlets in the company’s search function after Donald Trump became president, according to the Daily Caller.

“This was an election of false equivalencies, and Google, sadly, had a hand in it,” Google engineer Scott Byer wrote in a Nov. 9, 2016, post reviewed by TheDCNF.

Byer falsely labeled The Daily Caller and Breitbart as “opinion blogs” and urged his coworkers to reduce their visibility in search results.

“How many times did you see the Election now card with items from opinion blogs (Breitbart, Daily Caller) elevated next to legitimate news organizations? That’s something that can and should be fixed,” Byer wrote.

“I think we have a responsibility to expose the quality and truthfulness of sources – because not doing so hides real information under loud noises,” he continued.

“Beyond that, let’s concentrate on teaching critical thinking. A little bit of that would go a long way. Let’s make sure that we reverse things in four years – demographics will be on our side.” –DCNF

Not everyone at Google agreed with muting ideological opponents. Senior software engineer Uri Dekel – a self-described Clinton supporter, suggested that it was the wrong approach.

“Thinking that Breitbart, Drudge, etc. are not ‘legitimate news sources’ is contrary to the beliefs of a major portion of our user base is partially what got us to this mess. MSNBC is not more legit than Drudge just because Rachel Maddow may be more educated / less deplorable / closer to our views, than, say Sean Hannity,” Dekel wrote Byer in a reply, adding “I follow a lot of right wing folks on social networks you could tell something was brewing. We laughed off Drudge’s Instant Polls and all that stuff, but in the end, people go to those sources because they believe that the media doesn’t do it’s job. I’m a Hillary supporter and let’s admit it, the media avoided dealing with the hard questions and issues, which didn’t pay off. By ranking ‘legitimacy’ you’ll just introduce more conspiracy theories.”