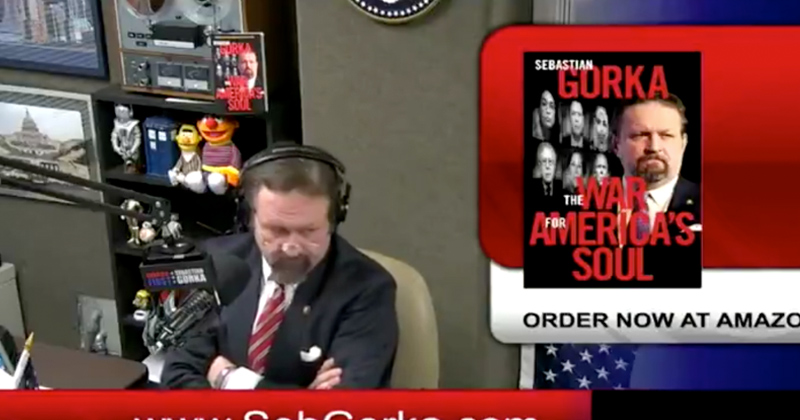 Supporters of Infowars.com came to its defense after GOP establishment gatekeeper Sebastian Gorka labeled the website “part of the problem.”

In a clip from his radio show “America First,” Gorka spoke to a caller who asked why he disparages Infowars.

“Well, you know they are a news channel, one of which many Americans look to and get a lot of information from, sir,” the caller told Gorka.

#InfoWars is part of the problem.

They undermine the Conservative Right.

“You gotta look a little bit deeper than that,” the caller explains to Gorka, who was once a Deputy Assistant to the president.

“No, I don’t need to,” Gorka replies, feigning ignorance when trying to recall the name of Infowars host Alex Jones. “Because I don’t look deeper into a show where the host – what’s his name, Alex Smith, or whatever – where he thinks ripping his shirt off is news. It’s a bunch of cranks. It’s a bunch of kooks.”

“If you’re watching it,” Gorka added, “I feel sorry for you because they are part of the problem. They undermine the conservative right.”

Supporters of free speech and Infowars, which played an pivotal role in the 2016 election of President Donald Trump, rallied in defense of the site on Twitter, blasting Gorka for bashing one of the president’s strongest media allies.

“They are actually more accurate than MSM,” one keen listener responded on Twitter. “Seb you need to back down partner, AJ and InfoWars were absolutely instrumental in the 2016 election.”

They are actually more accurate than MSM. Seb you need to back down partner, AJ and InfoWars were absolutely instrumental in the 2016 election. Shame on you

No Sebastian Dorka,or whatever your name is. Alex Jones and infowars got Trump elected. Atrazine, geoengineering, etc is real. Maybe you should look it up? Jones talks about a lot more than that too. Maybe you should listen and stop trying to undermine America's resurgence.

Are you auditioning for CNN Seb. You don’t get to dictate where we get are info spoken like a true Non-American still have that European mindset I see

“I’d rather side with Infowars than TPUSA,” said another respondent.

I'd rather side with Infowars than TPUSA.

They are right more often than CNN or the BBC! But irrelevant of that …people should have the choice to watch them if they choose! It’s a shame you feel the need to attack them!

#InfoWars is on our side. They’re ahead of the curve. More often than not, what they report is dismissed as conspiracy theory, but later confirmed. They engage in discussions that other outlets don‘t. Blacklisting InfoWars is buckling to the Left. @allidoisowen

“Sounds elitist and anti 1A to me,” yet another commenter pointed out, adding, “Disappointed.”

Sounds elitist and anti 1A to me. Disappointed.

I remember when the gatekeepers told me Trump was going to destroy American Conservatism.

#AlexJones and the #InfoWars crew are the BEST!

Tell us your fucking expert PhD opinion about chem trails. What are they? You’re swampy as hell.

You are wrong, Dr. G. Stop judging them by their fans. Look at the things Alex Jones has talked about and the record of them being exposed as correct within a few years. Alex Jones only undermines the right because he was smeared & cowards didn't stand up for him.

They helped you get your job, Gorka.

Have a little bit more respect.

You’re a liar & fraud.
You’re fake accent only highlights how pompous and pathetic you are.

It is hilarious to see you bashing #INFOWARS because you blame that platform for @POTUS @realDonaldTrump kicking you out of the @WhiteHouse.
You work for Murdock & Browder. #Lame

Read the rest of the comments on Gorka’s Twitter post for yourself, almost all of which slam the radio host for attacking Alex Jones.

Gorka also last week called on Infowars to be ejected from the 2020 Conservative Political Action Conference in Maryland as reporter Harrison Smith asked why “we shouldn’t be allowed to be here?”

.@SebGorka says Infowars should be kicked out of #CPAC for being “kooks.”

Such a free-speech warrior, huh? pic.twitter.com/pLRQep5tVw

“This is for real conservatives, not people who are snake oil merchants and conspiracy theorists like you,” Gorka responded, despite the fact he is a spokesman for Relief Factor, a fish oil supplement. Infowars was later escorted out of the conference.

As is tradition, Jones, meanwhile, has challenged Gorka to a charity bare-knuckle boxing match, and has taken to labeling him a “gay whale”:

Recently conservative impersonator Sebastian Gorka applauded the removal of some of President Donald Trump’s biggest supporters at CPAC, the annual political conference attended by conservative activists from across the United States and beyond.