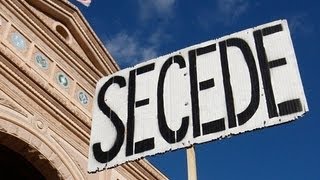 Several detractors have claimed that American citizens who sign petitions in favor of secession are advocating a new civil war, and can rightfully be stripped of their firearms.

As the secession movement continues to grow in all 50 states, with the total signatories to petitions approaching one million people, critics on the left and the right have claimed that the motivation of its proponents is to violently rise up.

These detractors are most likely attempting to poison the well of the overall issue, or at best have completely failed to grasp the concept of secession.

In a ludicrous, sardonic and sophomoric piece in the London Guardian, Diane Roberts suggests, that those in favor of secession want to “re-enact the American civil war”. In between labeling anyone who supports the idea a “white supremacist” or “fundamentalist zealot”, she argues that secessionists are “sore losers” that want to “return to 1861”.

Roberts says that the idea has “zero legal status”, and argues that the tenth amendment is null and void.

One canny commenter points out that for months on end the London Guardian has been carrying pieces that debate and even openly support the breakaway of Scotland as the will of its people, but is now carrying articles dismissing the legitimate ability for the people of any state in the US to the same right.

Roberts has a strange bed fellow to share her misguided opinions in Glenn Beck, who also claimed that anyone signing a secession petition would have to be “dumb” because they are advocating a violent uprising.

Meanwhile, gun rights advocate David Codrea points out that some are suggesting that if Americans sign a secession petition, they may be considered to have renounced their citizenship, and therefore no longer have the right to bear arms.

“Among the enumerated disqualifying triggers in U.S. Code rendering one a prohibited person, forbidden by federal law to own a gun, is someone “who, having been a citizen of the United States, has renounced his citizenship.”” Codrea writes.

Clearly both of these notions are laughable, as no one is advocating war or renouncing their citizenship. They are merely expressing the opinion that the federal government has become unwaveringly corrupt and gone rogue.

As we described at length in our editorial yesterday, Secessionists do not want to be part of a separate country, they wish to use the terms of the Declaration of Independence to reconstitute and restore the Republic.

In any case, under the tenth amendment, individuals have the right to remain “common law” citizens of their states or counties while declaring their independence from the federal government.

As we clearly stressed, the call is for the states, which created the federal government, to instigate a cultural restoration in the spirit of the bill of rights – a newly unified America under the Constitution – and not a violent overthrow.

In the following video, Alex Jones explains how sections of the establishment media are attempting to characterize the entire movement as a plot to bring down America when in fact America has already been captured and taken over by the political and financial elite.