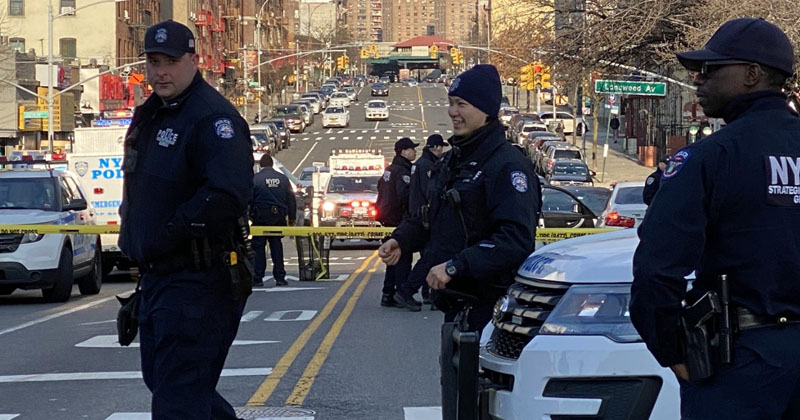 A New York police officer has been shot in the arm at precinct building and a suspect has been taken into custody, just hours after an unknown assailant opened fire on a marked patrol vehicle.

Shots were fired at the NYPD 41st Precinct building in the city’s Bronx borough early on Sunday. The force has confirmed that a female lieutenant at a desk was wounded in the arm and the attacker was apprehended by her colleagues.

FOOTAGE: Allegedly the shooting of the NYPD Lieutenant this morning inside the 41 Precinct in the Bronx pic.twitter.com/cmO6Bs51Zy

The injured officer was rushed to Lincoln Hospital, where medics say her life is out of danger. Another policeman also suffered minor injuries in the incident.

CCTV footage from the police station shows a man in an orange-and-blue jacket entering the building and shooting at people inside. He then tries to flee the scene but is forced to dive on the floor, apparently to avoid being hit by return fire from officers.

BREAKING: 2ND OFFICER SHOT: reports of an officer shot in the 41 precinct just hours after another officer was shot. @News12BX pic.twitter.com/i7KhrHJrTy

The shooting at the precinct occurred less than 12 hours after another attack on police in the Bronx, in which an officer was shot in the neck and chin after an assailant approached his marked van and asked for directions, before opening fire. That officer was rushed to hospital and is expected to be discharged in the coming days.

The attack on the van was also caught on video, which shows the police vehicle driving away with siren lights on as the perpetrator keeps shooting at it. The attacker – a man in a black jacket and a hood on – than crosses the road and walks right under a CCTV camera.

NBC reported, citing its sources, that the attacks on the police van and precinct were carried out be the same suspect. A senior police official identified him as Robert Williams, who’d been paroled in 2017 after a conviction for attempted murder.

The @nypd is asking for the public’s assistance identifying the male depicted in these photos for questioning in regard to the shooting of a NYPD Police Officer in the area of Simpson Street and Barreto Street in the Bronx. pic.twitter.com/HeI5fOovfO

Already, the billionaire has spent more money than Clinton-Dole-DNC-RNC combined in 1996 and he’s not anti-Trump, he’s anti-liberty on ALL issues