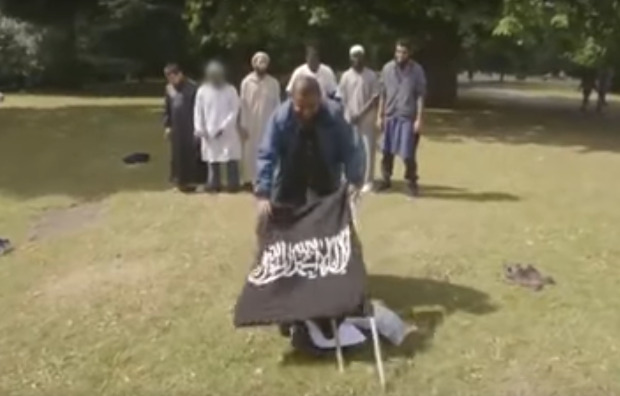 Former British comedian Pat Condell has established himself as a leading outspoken and incisive voice against the spread of Islam in Europe, having unleashed a torrent of blistering Tweets aimed at UK politicians and media after the latest London attack.

“Let ISIS fighters return to UK,” he wrote. “Ignore repeated warnings from the public. Don’t arm police officers. Clearly our security is not a priority.”

Let ISIS fighters return to UK. Ignore repeated warnings from the public. Don’t arm police officers. Clearly our security is not a priority.

Condell has repeatedly pointed out that many jihadists are well-known to authorities, who do little to prevent them from becoming active killing machines.

“Again the killer is a walking red flag,” he wrote. “Reported twice to authorities. They do nothing. Another bloodbath. Thanks.”

Again the killer is a walking red flag. Reported twice to authorities. They do nothing. Another bloodbath. Thanks.https://t.co/eKl6W6J10Z

Not only was the ‘ringleader’ of the London Bridge slaughter known and reported to authorities, it has come to light that he also appeared in a Channel 4 (state-run British television) documentary on radical jihadists living in the UK, in which he was seen worshiping the flag of ISIS.

“About 3,000 people from the total group are judged to pose a threat and are under investigation or active monitoring in 500 operations being run by police and intelligence services. The 20,000 others have featured in previous inquiries and are categorised as posing a ‘residual risk.'”

This information was published shortly after similar revelations that at least 400 seasoned ISIS fighters had returned to UK soil from the war in Syria.

“Britain now faces the very real possibility of trained killing machines carrying out attacks on the streets of London or elsewhere,” Westmonster reported in March.

Condell cuttingly mocked a now-deleted Tweet by pro-open borders Guardian columnist Owen Jones, who wrote just hours after the massacre on London Bridge, “Currently in a pub in central London, full of people laughing and chatting. Could be any Saturday night. No one is scared or cowed.”

Currently on the Titanic in mid-Atlantic, full of people laughing and chatting. No one is scared or… glug glug glug. pic.twitter.com/oaAA7PvCWY

“Currently on the Titanic in mid-Atlantic, full of people laughing and chatting. No one is scared or… glug glug glug,” commented Condell, highlighting the callous insensitivity of virtue signaling about the carefree attitude of cosmopolitan revelers while fellow Brits from Manchester and London lay dead, dying, or maimed in hospital beds in the wake of the third massive terror attack in 73 days.

British journalist Katie Hopkins, who is currently being persecuted for speaking out boldly against Islamic terror, also excoriated Jones, saying, “The Guardian employs this creature. Laughing as others were being stabbed & slaughtered. Do share his deleted tweet.”

The @guardian employs this creature. Laughing as others were being stabbed & slaughtered. Do share his deleted tweet. @OwenJones84 pic.twitter.com/SjNPCihz1d

Hopkins was recently forced out of her job as a talk show host on LBC Radio after her impassioned response to the suicide bombing in Manchester – which was carried out by Salman Abedi, an Islamist who had recently traveled to Syria and Libya and was well-known to international intelligence agencies due to his ties to terrorist organizations, yet allowed to roam freely.

Condell regularly posts brutally honest, unapologetic statements and videos warning about the dangers of the Islamization of Europe, often addressing women directly as they are the most deeply affected by the wave of rapes and murders now washing across much of the continent.

“You stupid women who still applaud this invasion, who welcome these fake ‘refugees’ – as long as they live in somebody else’s neighborhood – you are like spectators at an approaching tsunami,” he said in a video earlier this year. “You’ve got no idea what’s coming your way, and by the time you find out, it’s going to be too late.”

The self-proclaimed ‘free speech fundamentalist’ is currently being censored on Twitter in Germany – a path down which the UK authorities are not far behind as they actively patrol social media in search of anti-jihad, anti-migrant commentary and enforce punishment for thought crimes that go against the globalist agenda.