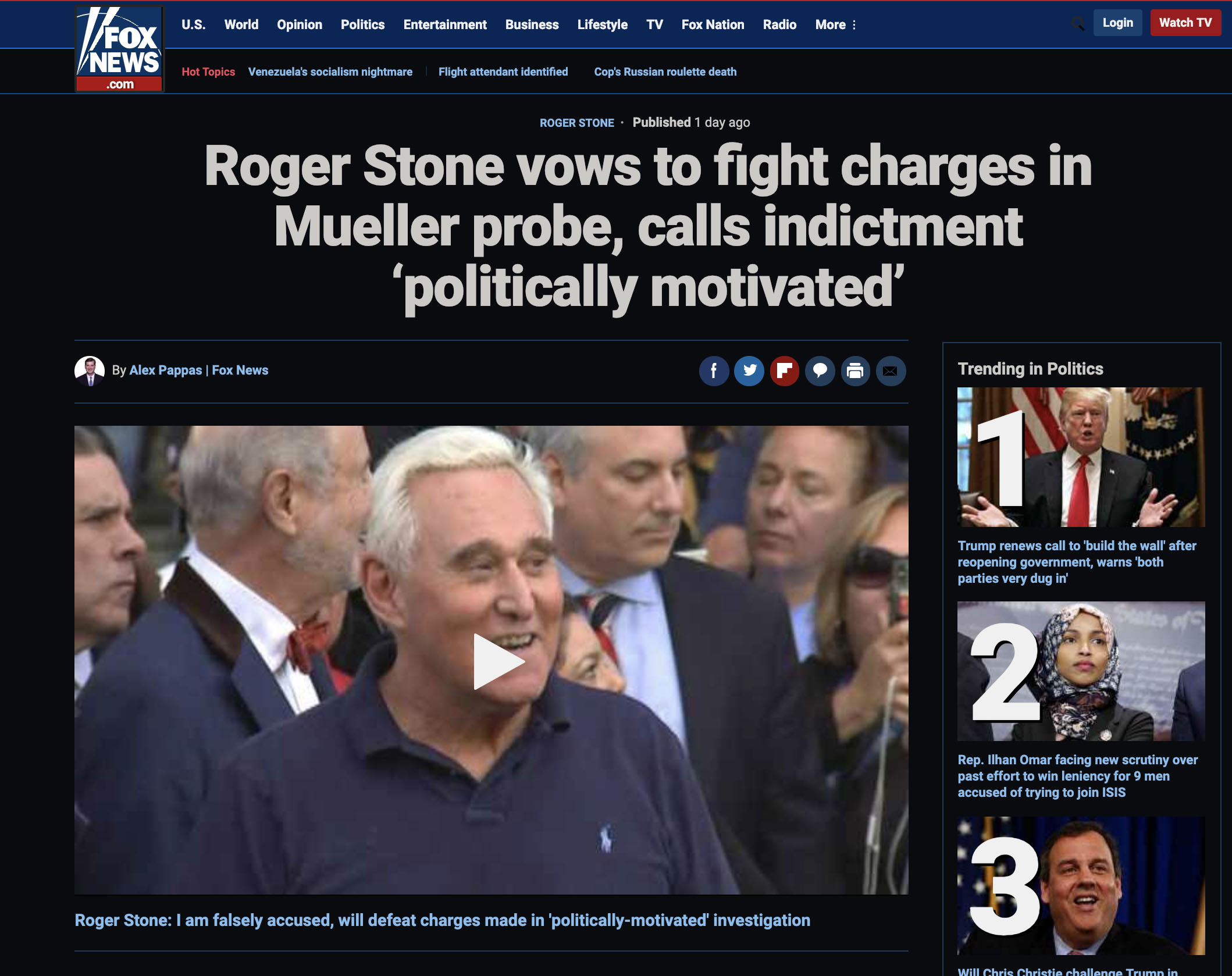 Former Trump campaign advisor Roger Stone gave Infowars an exclusive interview after he was raided Friday by the FBI at the direction of Special Counsel Robert Mueller.

Stone stated he’s prepared to fight the charges brought to him by Mueller’s “politically-motivated investigation.”

“There is no circumstance whatsoever under which I will bear false witness against the president, nor will I make up lies to ease the pressure on myself,” he said at a press conference outside his home.

Here’s the first 30-minute exclusive interview from Stone since his arrest, where he describes the pre-dawn FBI raid and the heavy-handed intimidation tactics by Mueller.

In Part 2 of our exclusive interview, Stone outlines the details of his indictment while hundreds of mainstream media reporters shouted outside.

In Part 3 of the exlusive interview, Stone delivers an emergency message to President Trump as the Deep State closes in.

A Note from Alex Jones on the bigger picture:

In a move orders of magnitude more aggressive and unconstitutional and worse than the McCarthy Era and the Red Scare, the leftist CIA-run weaponized Washington Post is working hand-in-glove with Robert Mueller in a huge inquisition persecuting, threatening, attempting to set up basically anyone and everyone in connection to Trump or his orbit. And we have now learned that The Washington Post, simply off their “sources” that say Mueller is asking about Roger Stone, Jerome Corsi, Alex Jones, and David Jones in connection to a hush money investigation in the hiring of Corsi in January 2017.

This is how you defame someone; this is how you engage in really criminal-level defamation to try to falsely set up and then imprison your political opposition. And the essence of the questions is the idea that Infowars hiring Jerome Corsi to try to set up a Washington Bureau and be a reporter at the White House was done according to their “suspicions” as a payoff for something Corsi did for Roger Stone – it’s absolutely asinine. Then by extension, they’re calling the severance payments made after Corsi was let go a year and a half later in June 2018 “hush money,” and those payments have now ended because that’s what the contract said, that it ended the following January unless the person was fired for cause.

So we were nice, gave him a severance package because we weren’t happy with the quality of some of his reporting and the fact that he hadn’t successfully set up a Washington Bureau or kept the White House press credentials we needed. That’s why we’re publishing why he was let go, because they’re trying to maintain that giving someone six months severance is supposedly hush money – it’s totally insane. There was nothing to hush up back when I hired him, there wasn’t even this fake investigation pertaining to Corsi or Stone — the whole thing is absurd. There’s no logic, it’s a total fraud. It’s a fiction within a fiction. This whole thing is just like Hollywood. That’s what the mainstream media has become, like screenwriters, and this is as fake as Star Wars or Pokemon. It’s just totally unreal and it destroys lives, and they put people’s names up there and present it in their fake news in an attempt to destroy us without ever being able to face our accusers.

We also in the last year had other events that we’ve not reported yet that appear to be classical attempts at entrapment by Mueller’s inquisition with connections to the RussiaGate fantasy. It’s a clear and present danger for the nation and the world. The Congress must act, President Trump must act. The fact that Trump appears to be getting Deep Stater William Barr in as Attorney General, whose wife is best friend’s with Mueller, and the fact the new AG nominee doesn’t believe there is witch hunt, does not bode well. And though I support many of Trump’s policies and don’t think he’s a bad person, I just don’t see him defending the American people from the censorship and persecution and the other things that are going on. So at this point, this rampant criminality we see out of D.C. that Trump and others aren’t meeting head-on – even though he’s been told to release the FISA documents and do all the right things, and appoint a Special Counsel on Uranium One – they aren’t doing any of that.

Trump must take action now because if he doesn’t, his supporters who are in the trenches are going to have to abandon him, simply because he’s abandoned us. I know he’s caught up in the TV spectacle fighting Nancy Pelosi and things like that, but while that’s going on there’s a TERROR of intimidation, lies, and fraud going on in D.C. and that his biggest supporters are patriotic Americans and Boy Scouts. We need the calvary and we need it now because once you cross the political rubicon of this level of criminality like Mueller has done, there’s no going back.

As Winston Churchill said, “If you will not fight for right when you can easily win without bloodshed; if you will not fight when your victory will be sure and not too costly; you may come to the moment when you will have to fight with all odds against you and only a precarious chance of survival. There may be even a worse fate, you may have to fight when there is no hope of victory, because it is better to perish than to live as slaves.”

I’m in the latter third column. These people are evil, they’re pedophiles, they promote evil, corruption and the fall of the family, they cover up all this stuff and they need to be met head-on, and I don’t think the American people understand the true magnitude.

Alex Jones presents live video footage from Fort Lauderdale, Florida where an angry mob, likely manufactured by the mainstream media, shouts Roger Stone down as he attempts to refute the crimes charged against him before the press.