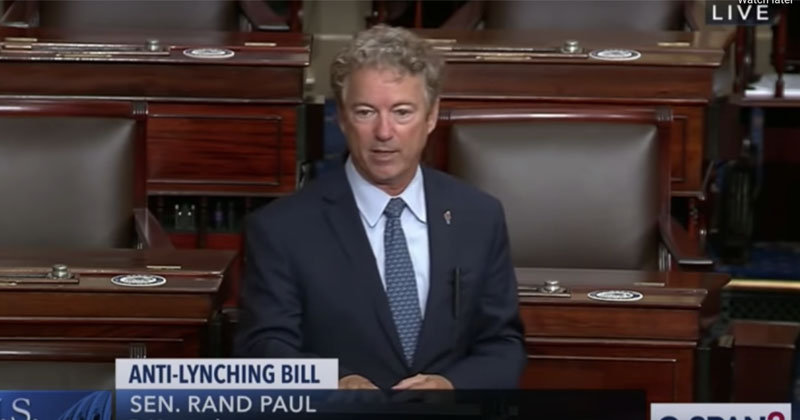 The bill, which Cory Booker said last year was inspired by Jussie Smollett’s supposed “lynching,” does not make lynching illegal as it’s already illegal but instead creates a new crime called “conspiracy to lynch” that will allow the feds to ramp up mass incarceration for thought crimes.

Senator Paul is “single-handedly” holding this atrocious bill up as the GOP-controlled senate is too cowardly to stand against it, lest they be perceived as “pro-lynching.”

Hey @CoryBooker and @KamalaHarris lynching is already illegal but slapping someone is not lynching, We shouldn't conflate someone who has an altercation with minor injuries, with lynching, That's my opposition to this without my amendment to fix it. https://t.co/vmyuk55Dcc

I think it’s important to know and to let the record show that I’ve been working with Senator Booker’s office for three months on the amendment to this bill that I’m willing to have unanimous passage of the bill today, but I think it’s incredibly important that we get this right. A woman in New Jersey, a black woman in New Jersey, assaulted three Jewish women and slapped them. It was terrible and she uttered racial epithets about these Jewish women. She was charged with third degree misdemeanor assault up to a year in prison, which actually sounds to me pretty significant for slapping, but she was then charged with a hate crime in addition to that that would be four years in addition. So we do have to get this right. If slapping someone and hurling a racial epithet could get you 10 years in prison, this is exactly what we’ve been fighting about in criminal justice reform, that we set up a system, we didn’t pay attention to the penalties, and all of a sudden, things we didn’t intend happen. So we have to be smart about this. I’m willing to pass the bill today, as amended, which would simply say not that you even have to harm someone, you have to attempt to harm them, but it has to be an attempt to harm them.

So all of the discussion about bruising while trying to lynch someone, yes that’s attempted murder, it would be covered by this bill. Nothing in the bill would stop, would prevent the prosecution of heinous behavior. That’s what it’s intended for. What I’m intending is … What I’m trying to do is to make sure we don’t get unintended consequences. We’ve fought the battle against mandatory minimums for a decade now because we tie up people in sentencing that makes no sense. 10 years for slapping someone would be an abomination and it couldn’t happen to anyone. Do we want a black woman who slapped three Jewish women in New Jersey to get 10 years in prison? If there was a group of them, it’s now a conspiracy to lynch. We have to use some common sense here. We should not have a 10-year prison sentence for anything less than at the very least an attempt to do bodily harm. The statute lists what bodily harm is, but it could still be an attempt, it doesn’t mean you actually have to have it, but what it would preclude is somebody shoves somebody in a bar and they fall down and they have an abrasion and they say he did it because of a racial animus towards me, and you have a 10-year penalty, that’s not right.

So all of us here are advocates on the same side of criminal justice reform, we all have argued on the same side that the law is screwed up, and has incarcerated too many people unfairly. That’s what I’m trying to prevent here, and so the thing is is I understand the emotions on it. You think I take great joy in being here? No. I’m a sponsor of 22 criminal justice bills. You think I’m getting any good publicity out of this? No, I will be excoriated by simple-minded people on the internet who think somehow I don’t like Emmett Till or appreciate the history and the memory of Emmett Till. I’ll be lectured to by everybody and I’ve got no right

…in the memory of Emmett Till. I’ll be lectured to by everybody. I’ve got no right to have an opinion on any of these things. I should be quiet. But we can’t just not read our bills. You know, I have worked in an honest way with Senator Booker’s office for three months on this bill. We have gone back and forth. We gave them some language. They came back to us and said it wouldn’t work. And I said, “Well, what about this?” And then we haven’t gotten any more responses.

So we haven’t gotten responses back in a month or more, and the thing is, is now they’re litigating in the press and trying to accuse me of somehow being in favor of something so heinous that it makes my skin crawl, that it makes me sick to my stomach to even read the accounts of what happened.

But we also ought to be fair and honest about this. Lynching is illegal. People who are saying there’s no federal law against lynching or not telling the truth. The law says, if you kill somebody and you have racial animus under the Hate Crime statute, it is illegal. You can’t do that. It’s also illegal in all the states. This bill does not make lynching illegal. So for all the discussion of that, this bill creates a new crime called conspiracy to lynch. Well, yeah, I’m for it. If there’s a crowd, let’s arrest of the whole mob. All four policemen should be responsible for what happened to Mr. Floyd.

But the thing is, is when we do that, we have to be careful that we don’t then put a crowd of people in where someone pushed into someone or someone slapped someone. There has to be justice. People are chanting justice. Justice has to have a brain and has to have vision and can’t be hamstrung into something that could give someone 10 years in prison for a minor crime.

This is a very minor attempt. Everything we left in here, we have worked with Senator Booker’s office to make sure it is inclusive. They came back and said, “What about attempted?” And we said, “Let’s change the language.” So we have in there, “attempt to cause seriously bodily harm.” So there could be no injury, but someone will have to have a discussion of whether there was an attempt and it was an attempt that looked like it would be serious.

So I think slapping someone isn’t, but under the current statute, as is, people will say, “Oh, nobody will ever do it.” Maybe, but we’re putting it on the books. The mandatory minimums have kept people in jail for decades. There are people in life for nonviolent crimes. All of us have worked on the same side of that issue.

I’m asking for a very minor change. I’ll pass it right now. I’m completely out of the way. I’m for the bill. I’m asking unanimous consent to pass a bill today with one amendment that just says, let’s be careful not to arrest people for slapping someone or not to arrest somebody for pushes into someone and get them 10 years in prison.

This isn’t about someone trying to kill another person or someone attempting bodily harm. Those people would be included in this language, even if they did not have a mark on the person, but if they were rounding them up, tying them up, and they’d thrown a rope over the tree, that’s attempted murder. And they would still be included under this bill, even without a mark on them.

But what we have to preclude and what we’re trying to preclude is that the bill doesn’t get used for the wrong purposes. We’re all on the same side about who we want to punish and who we should prevent. And we’re also on the same side on the symbolism of this, but we can’t pass laws that do exactly what all of us have said is wrong with our penal system, all the unintended consequences.

There is one here and I ask in a very polite way, and I’ve been asking for three months for one small change, and I would let the bill go today, on this day, if we could have it. And the changes have been out there. They’re not brand new and they’ve been in Senator Booker’s office for three months and we’ve tried to, as he’s had objections, work with him on his objections. So I would ask unanimous consent, once again, to pass the bill as amended.

Democrats are releasing almost everyone arrested for taking part in the riots and looting over the past two weeks but they want the feds to be able to throw anyone in prison for a decade or more for the most minor slight if their actions were motivated by any alleged racial bias.

Meanwhile, Republicans — with the sole exception of Rand Paul — are not only doing nothing to stop it but are eager to sign on to this lunacy!

Contact your senator and tell them you stand with Rand!