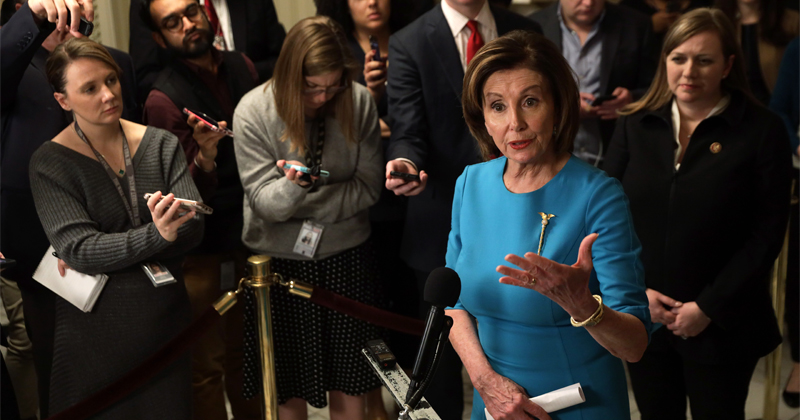 The Senate may want to amend the House’s Phase Two coronavirus bill and not pass it immediately, according to Politico.

The deal, cut between Nancy Pelosi and Treasury Secretary Steven Mnuchin is unlikely to make it through in its current form, according to senior Senate GOP sources, who say that Senate Majority Leader Mitch McConnell and his chamber are going to insist on a much bigger say in the next stimulus package.

— MCCONNELL'S GOAL is to have the Phase Three package wrapped up before the EASTER RECESS, which begins April 3 — Congress is scheduled to be out from then until April 20. But, in reality, they want this done ASAP.

“Most of the measures in this bill are something that the senators will support, I believe. … But we worry that the bill setting up a new and complicated system relying on businesses giving paid sick leave and then getting a refundable tax credit that won’t move quickly enough and could put pressure on those businesses to lay workers off,” Cotton added.

NEW … TOM COTTON is whipping up opposition to the Pelosi-Mnuchin bill.

After Fox and Friends this AM, the Arkansas Republican’s LD sent an email to his fellow LDs urging the Senate to adopt its OWN plan. pic.twitter.com/br64g8rxqp


Meanwhile, Rep. Louie Gohmert (R-TX) “has signaled he will insist on approving the corrections to the bill, or else he will object to the unanimous consent request in the House,” which Politico says “would grind this process to a halt.”

NEW — LOUIE GOHMERT is insisting on reading the technical corrections to the House’s coronavirus bill.

As long as one person stands in opposition, the House cannot send the bill to the senate without bringing the chamber back for a vote.


Earlier in the day, Politico reported that the bill remained “hung up in negotiations” amid “major differences” after the Senate canceled its week-long recess to address the COVID-19 pandemic.

House sources said Monday that “major differences” remained between the White House and House Democrats over what was adopted and needed to be changed. This is slowing down the time table for House completion of the bill and sending it onto the Senate.

Pelosi and administration officials still remain hopeful they can achieve a workable compromise, but were tight-lipped about the state of play on Monday.

Senate Majority Whip John Thune (R-SD) is asking members to submit their own ideas for an additional stimulus package by noon on Monday, according to a Senate aide.

On Tuesday, Mnuchin is expected to attend the Senate Republican lunch – implying he may need to schmooze to sell the deal.