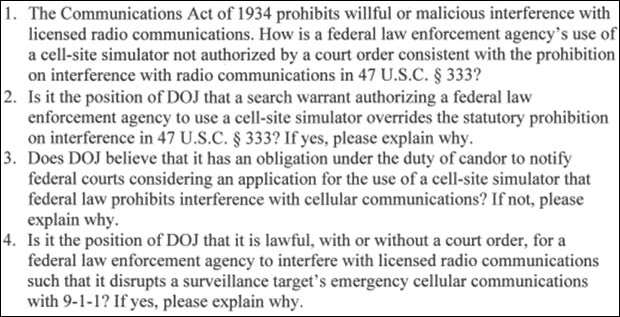 A U.S. senator has revealed that cell-site simulators, cell phone surveillance devices commonly referred to as “Stingrays,” may interfere with 911 calls.

In a letter to Attorney General Jeff Sessions, Sen. Ron Wyden (D-Ore.) said that the Harris Corporation, a Florida-based manufacturer of cell phone spying technology, was unable to confirm that its products did not affect a caller’s ability to reach emergency services.

“[W]hile the company claims its cell-site simulators include a feature that detects and permits the delivery of emergency calls to 9-1-1, its officials admitted to my office that this feature has not been independently tested as part of the Federal Communication Commission’s certification process, nor were they able to confirm this feature is capable of detecting and passing-through 9-1-1 emergency communications made by people who are deaf, hard of hearing, or speech disabled using Real-Time Text technology,” Wyden wrote.

The senator, who has challenged the federal government on numerous issues in regards to digital surveillance, went on to question whether a Stingray’s capabilities violate U.S. law.

“Harris’ acknowledgment that its cell-site simulators totally disrupt a target telephone’s communications raise serious questions including whether the disruption fails the reasonableness requirements of the Fourth Amendment or violates provisions of the Communications Act of 1934,” Wyden said. “However, the government’s warrant applications focus almost entirely on the Fourth Amendment question of whether there is probable cause supporting the warrant and largely gloss over other important issues.”

Wyden further asks the Department of Justice to investigate and answer numerous questions related to whether cell-site simulators are operating legally. 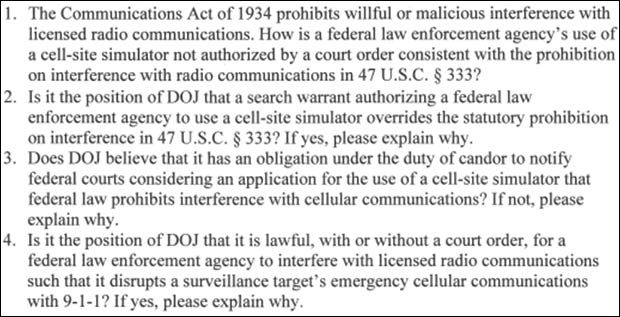 “The government has a duty of candor to describe relevant information when presenting a warrant application,” Wyden sayd. “DOJ knows far more about cell-site simulators than the courts. It has an obligation to be candid, forthright, and to fully disclose to courts the true impact of this surveillance technology.”

Wyden has requested the Department of Justice respond to his questions by September 14.