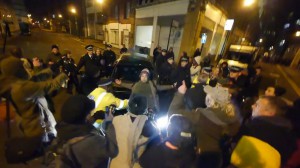 Yesterday some 50 squatters were peacefully evicted from the Occupy movement’s “Bank of Ideas” located a mile and a half from the main site at St Paul’s Cathedral, just outside the borders of City’s Corporation of London. For the last three months, they successfully squatted the formerly vacant UBS-owned building, using it as an educational centre and meeting house Occupy London participants.

Protesters were grouped together as officers and privately contracted bailiffs whom the police curiously refer to as ‘enforcement officers’, moved in to take possession of the occupied property owned by UBS.

Then things went a bit wobbly. As the London Guardian reports:

Police and enforcement officers then moved to evict squatters from another building in the complex, also owned by a subsidiary of the Swiss banking group, during which observers claim a photographer was punched in the face by a bailiff who then allegedly drove his car towards at least one person and carried another on his bonnet for 50 yards.

Jules Mattsson, the photographer who claims he was punched, told the Guardian the alleged assault was unprovoked. “I went to get a couple of frames of him, and he just hit me.” He wrote on Twitter: “I have a right to go about my job covering news without fear of assault.”

Shortly after using his car to plough through the crowd and after alleged assaulting two journalists, the driver in question attempted to make a swift getaway at full speed – only with a protester still hanging onto the bonnet of his car as he speeds down the road. Later, the driver who was UBS corp’s privately contracted bailiff and clearly a danger to the public, was neither detained by the police on site, or brought under any form of restraint.

This particular incident could easily be classed as much more than mere assault. More aptly, it could be classed as attempted manslaughter, or perhaps attempted murder, depending on how you interpret the incident. The reckless use of a motor vehicle where pedestrians and people are concerned normally carries a serious penalty, even if no fatalities occur. The courts will rule in this way because the automobile can be classed as a lethal weapon.

Interestingly enough, some protesters allege that these bailiffs were both violent and aggressive – whilst under the supervision of officers from the Metropolitan Police and City of London Police. If would have been prudent in this case if police had moved in and applied some excessive force for the purpose of restraining UBS corp’s crazed bailiff so as to protect peaceful demonstrators, press and innocent bystanders.

Normally, the state would be seen as a protector of one’s fundamental rights in this situation, including the security of persons and property. In this case, however, we see the state standing back and watching – as representatives of a privately owned corporation apply force which is both excessive and lethal, in order to secure the property of their off shore corporation employers, in the particular instance UBS bank of Switzerland.

Clearly in this case, the rights and desires of UBS bank have trumped the basic human rights of the Occupy protesters and the press who were on site to cover the event.

In recent years, and also following the G20 protests in 2008, police in London have frequently been accused of excessive force and using dangerous methods like ‘kettling’ in order to achieve their own operational objectives. In the case of police kettling, the state has recently sided with the police’s right to apply excessive force in putting down and ‘crowd managing’ peaceful demonstrations.

What we see here is the public coming in at the bottom of the state’s list of priorities on all counts – rather than the state serving and protecting citizens who are exercising their right to free speech and assemble afforded to them by the country’s constitution.

One can only wonder how many more of these Chinese-style suppressions will it take before citizens wake up and properly acknowledge they living in a fully functional, post-modern police state.