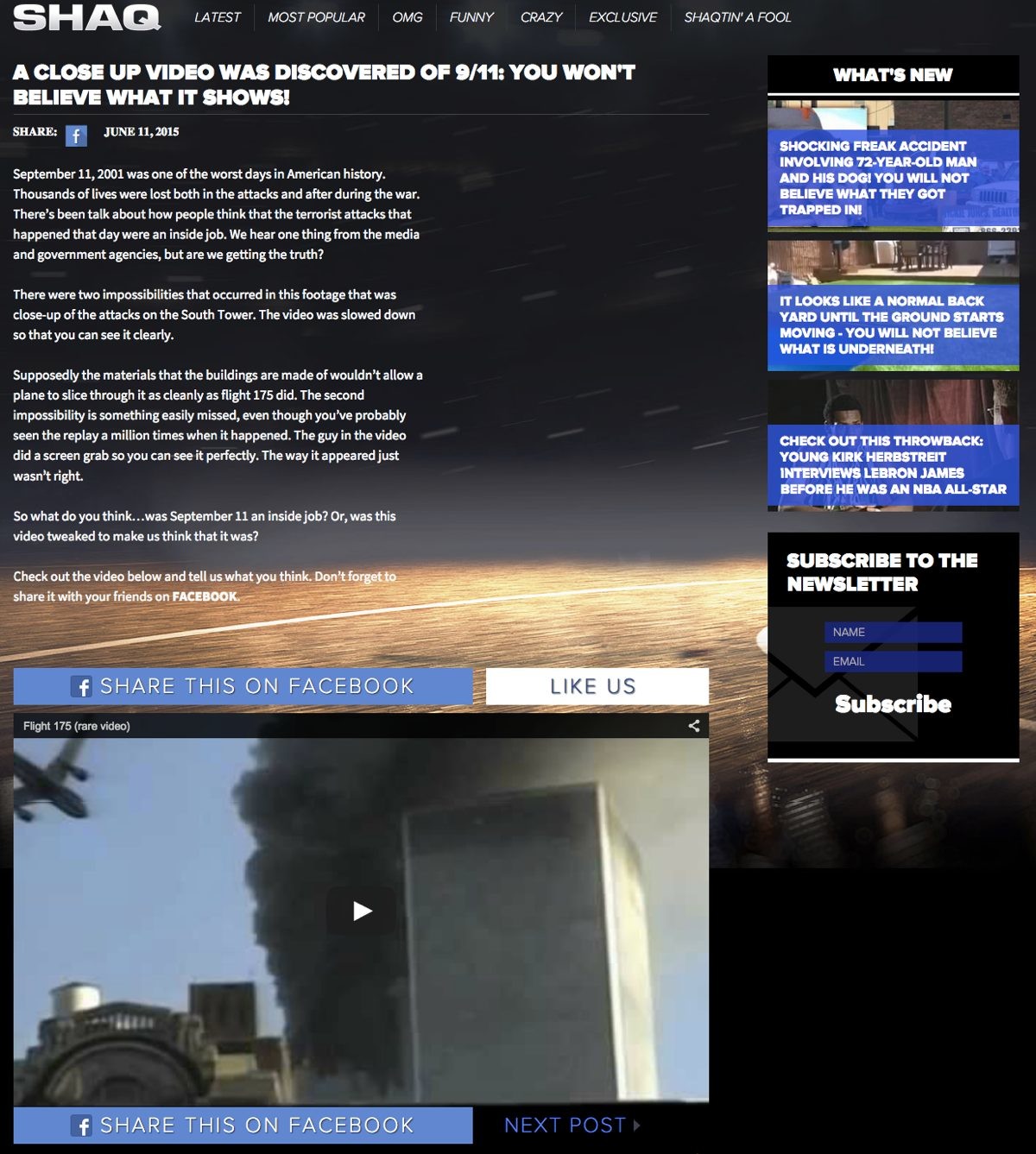 A post questioning the events of 9/11 appeared on former NBA basketball player Shaquille O’Neal’s website, prompting many to speculate whether the 43-year-old athlete believes the event to have been an “inside job.”

Appearing on the Blog.shaq.com website sometime yesterday, a post which was deleted soon thereafter claims, “A Close Up Video Was Discovered of 9/11: You Won’t Believe What It Shows!”

September 11, 2001 was one of the worst days in American history. Thousands of lives were lost both in the attacks and after during the war. There’s been talk about how people think that the terrorist attacks that happened that day were an inside job. We hear one thing from the media and government agencies, but are we getting the truth?

There were two impossibilities that occurred in this footage that was close-up of the attacks on the South Tower. The video was slowed down so that you can see it clearly.

Supposedly the materials that the buildings are made of wouldn’t allow a plane to slice through it as cleanly as flight 175 did. The second impossibility is something easily missed, even though you’ve probably seen the replay a million times when it happened. The guy in the video did a screen grab so you can see it perfectly. The way it appeared just wasn’t right.

So what do you think…was September 11 an inside job? Or, was this video tweaked to make us think that it was?

The following video, which questions whether a plane actually flew into the towers, accompanied the post:

The article was subsequently shared on Shaq’s official Facebook page, where it was also deleted; but not before receiving 5,483 likes and 2,539 shares in about three hours, according to a screengrab from the New York Post. 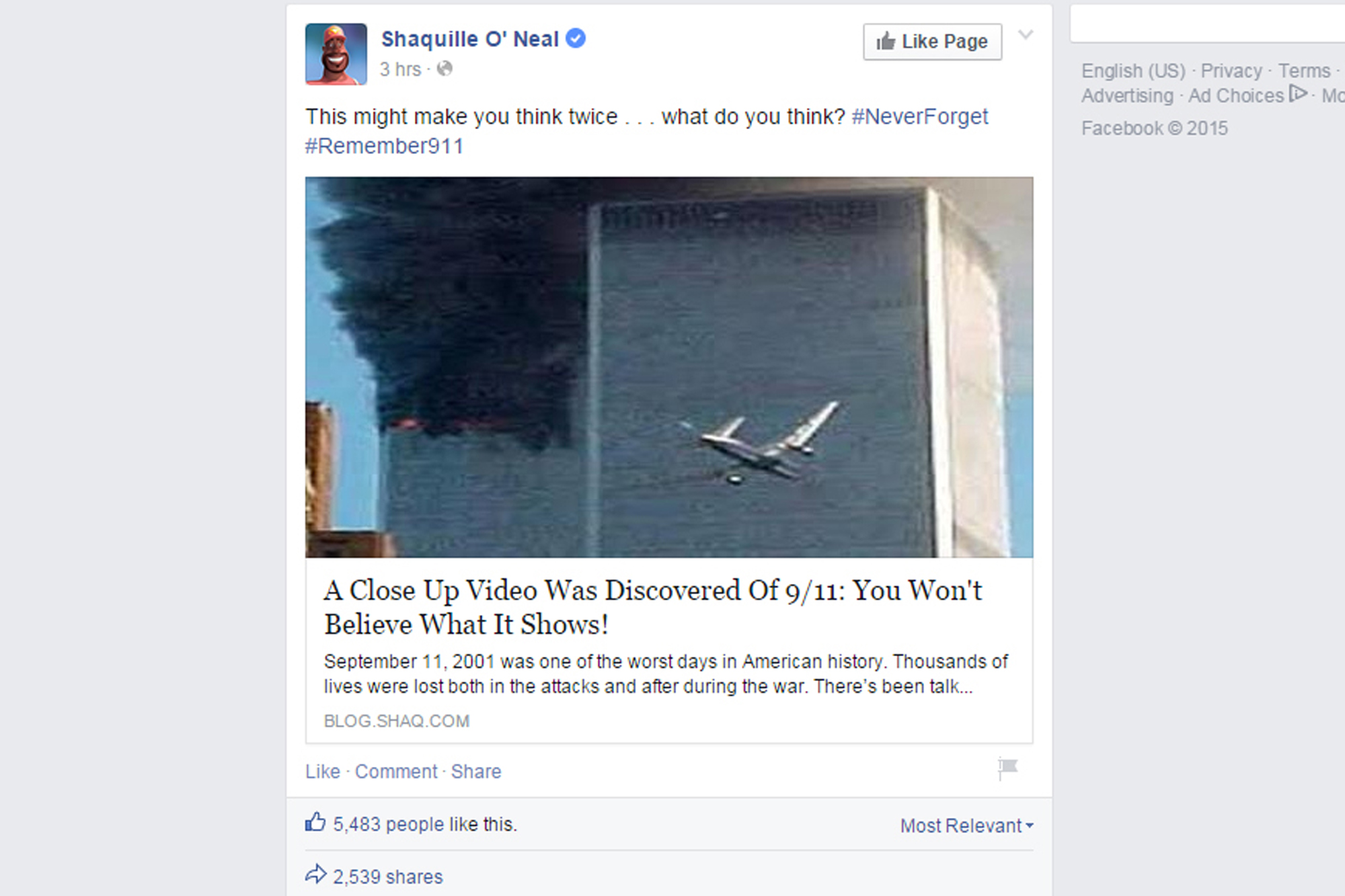 Establishment media predictably laid in on O’Neal for daring to question the government’s official narrative, with Gothamist asking if he’ll “join us on our next visit to a 9/11 Truther Conference. Or maybe you’ll be the keynote speaker?”

While it’s nice to think the TNT host has the time to update an entire website, it’s more likely one of his blog staffers posted the article.

“Shaq’s website is owned by Mine O’Mine, a licensing company in which Shaq is president, treasurer and secretary,” SportingNews.com reports.

Mediaite speculates someone at Mine O’Mine “thought better and deleted the posts after several sports sites picked up on it.”

While Mine O’Mine runs Shaq.com, a company named Digital Mavericks runs his blog.

As yet, Shaq has not issued a statement addressing the issue, but if he or any of his staff are truly interested in learning about terror attacks staged by the US government, they could start by watching Alex Jones’ history-reviewing documentary film, “Terrorstorm: A History of Government Sponsored Terror.”

The movie outlines in great detail how “criminal elements inside governments have carried out terror attacks against their own populations as a pretext to enslave them,” including declassified “false flag” instances such as the infamous Gulf of Tonkin debacle, and Operation Northwoods, in which the U.S. Joint Chiefs of Staff devised a plan to shoot down American airplanes full of passengers, in addition to shooting Americans in the streets, in order to blame Cuba.

Update 2:24 PM CST: Shaq has released a statement distancing himself from the post and saying he fired the company that manages his page. Statements from Shaq and the CEO of Digital Mavericks follow, via Deadspin:

This post was insulting and offensive, and I apologize to everyone who came across it. Once I learned that it was on my Facebook page and blog, I ordered it removed and fired the firm that posted it. I am not and never have been a “9/11 truther.’’ My father served our country and I am immensely proud of the sacrifices people make daily to keep us safe. The events of 9/11 were a horrible tragedy for our nation and it’s a disgrace that anyone would think otherwise.