To you, who will save us all from committing hate crimes…

To you, the campus heroine who is emotionally triggered by an ant on a bread crumb…

When you show up at an event protesting and screaming and crying inconsolably, because one of your professors used the word “Halloween” in class, you have to come across as authentic. You can’t look like you’re making it up and pretending. You need training. Enroll in an acting class. Learn how to access childhood traumas (e.g., no ice cream after supper) and spew out the emotions as if they’re spontaneous, rather than studied. And for goodness sakes, don’t mug for the camera. It’s a dead giveaway.

Instead of outfitting your safe space on campus as a kindergarten, with coloring books and Play-Doh and blocks and little choo-choo trains, build it in the style of a large hospital room. Beds, IVs, perhaps a small bouquet of flowers on a night table. Bottles of pills, disarmingly ugly trays of institutional food. Dress a few adults in doctors’ coats. They move in and out, checking charts. These are all signals that you’re truly disabled.

When you’re out and about, don’t wear designer clothes and don’t carry expensive gear. Be tattered. Tear up old clothes and rub them in dirt and mud before you put them on. Go for the “young homeless” look.

Don’t ever mention you’re matriculating at a school where the tuition is in the tens of thousands. That’s a negative.

Don’t carry an expensive cell phone, and don’t reflexively look down at your hands as if you were carrying it.

At events, arrange your people’s sounds. Keeping in mind where the campus-press microphones and iPhones are, introduce a blend of screams, yells, moans, and whimpers. Don’t let the screams drown out everything else. You want a range of noise, indicating you and your triggered followers represent a diversity of crippled reaction.

Body size. At events, avoid a gaggle of the obese up front. The sympathy factor will diminish. Fat, thin, normal—distribute the shapes. No one carries food.

Ten to 15 minutes of action are enough. Preserve your energy.

As a rule of thumb, 30% anger is the limit. More suggests you’re moving over from a) being-triggered into b) activism, which is a quite different category.

The world is your oyster. In your mind, pretend every adult you encounter equals “a parent who originally triggered you.” If by chance a grief counselor shows up looking for a quick hustle, avoid him. You don’t want help. Help is out of the question.

—Of course, when you graduate from college, you’re going to shift gears rapidly.

You’re going to find a job in a Democratic political campaign and then work your way through a blizzard of Left organizations. These are paid positions.

This is a budding career.

Then you’ll: dress up, not down. You’ll need to look good and switch into articulate mode. Clean, mean, and precise. Ruthless.

After a few years in the trenches, find a liberal banker. Marry him. You were gay, you’re not gay now. Not for at least six years, when comes the divorce and the quite generous settlement:

It’s amicable. You move into nice digs on the upper east side of Manhattan. This is your launching platform.

Now…there are several ways you can go. A gig with a well-endowed foundation. Campaign consultant for a Demo candidate running for a seat in the House. But…you could even start your own news outlet. Worm your way into meetings with staffers for the next Demo presidential nominee and assure them your news operation can serve as a front. They can feed you stories.

Your new girlfriend is a fairly famous musician. She puts you straight into Hollywood. A whole slew of new connections. Now you can practice the art of hosting, arranging meetings between people on both coasts who would otherwise never rub elbows.

It’s all good. You’re a seller, and the buyers are there.

Soon, you’re Beverly Hills and Bel-Air and Manhattan and Washington and Georgetown.

The whole arc should take no more than 15 years. You can do that standing on your head.

(To read about Jon’s mega-collection, Exit From The Matrix, click here.)

Issues? Climate change. Open borders. Global interdependence. Minorities. Universal healthcare. With your well-manicured hand on Henry Kissinger’s knee, in a quiet parlor off the living room at a party, you can ask a few questions, and he can brief you on all you need to know in a half-hour.

You’re a liberal, you’re a communist, a socialist, a Progressive, an elitist, a Globalist, a host, a doyen, a journalist, publisher, deal-maker, fixer, high-flyer, investor, carpetbagger, insider, Hollywoodist, shill.

You’re “for the people.”

And always will be.

From that central lie, everything spreads out like spokes of a wheel.

And one day, when a weeping dribbling triggered college kid approaches you for advice, you can look down at her and smile, knowing you were there once, knowing that’s how you started out; it was your first gig, it’s how you muscled into the game. It was your initial con.

If she has that unrelenting attitude, and that…

In the depth of her soul.

This article originally appeared on NoMoreFakeNews.com. 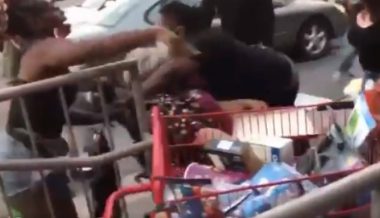