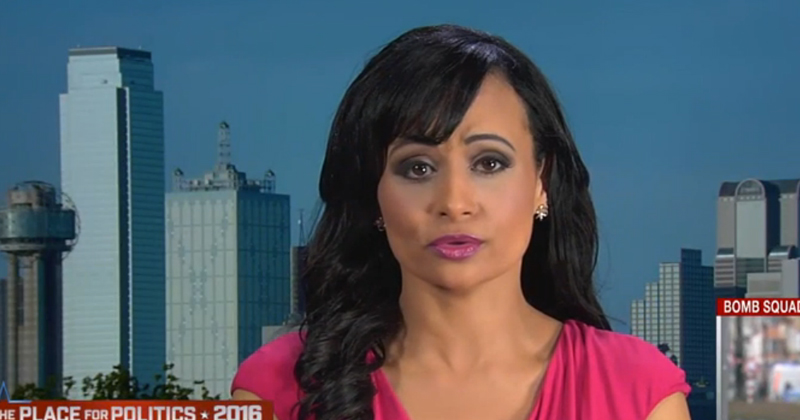 The spokeswoman for Donald Trump’s presidential campaign made good on her boss’s threat to “spill the beans” on Ted Cruz’s wife.

Speaking on MSNBC Friday, Katrina Pierson weighed in on the heated back and forth spat between her boss and Sen. Ted Cruz over whether the candidates’ wives are fair game.

Asking about a meme Trump retweeted in response to an ad sent out by a pro-Ted Cruz super PAC, Steve Kornacki asked Pierson what Trump meant when he threatened to “spill the beans” on Cruz’s wife.

“Spilling the beans is quite simple when it comes to Heidi Cruz,” Pierson replied, proceeding to give a preview of what Trump may further have in store.

“Her entire career has been spent working against everything Ted Cruz says that he stands for,” Pierson said.

“She is a Bush operative; she worked for the architect of NAFTA, which has killed millions of jobs in this country; she was a member on the Council on Foreign Relations who — in Sen. Cruz’s own words, called a nest of snakes that seeks to undermine national sovereignty; and she’s been working for Goldman Sachs, the same global bank that Ted Cruz left off of his financial disclosure, and also has Chairman of the Board of the Federal Reserve, which is something that Senator Cruz promised to audit the Fed, and didn’t show up for the vote,” Pierson stated.

The “spill beans” threat originally stemmed from a meme sent out by a pro-Ted Cruz super PAC showing Trump’s wife in the nude. The hotel mogul blamed Cruz for the ad, and added he would retaliate.

Lyin' Ted Cruz just used a picture of Melania from a G.Q. shoot in his ad. Be careful, Lyin' Ted, or I will spill the beans on your wife!

In the interview Pierson – a former supporter of Ted Cruz – also touches on why Trump decided to retaliate, despite the Cruz campaign denying responsibility for the ad.

“It may not have been directly from the Ted Cruz campaign, but this super PAC was operating on the behalf of Ted Cruz. It was a pro-Ted Cruz ad. And from the beginning since Mr. Trump entered this race, he disavowed all Super PACs, sent out cease and desist letters to those who were operating in his name, and told the candidates, ‘If you do not disavow super PACS we will hold the campaign accountable for the attacks’ against him. And that’s all Mr. Trump did.”

Pic of your wife not from us. Donald, if you try to attack Heidi, you're more of a coward than I thought. #classless https://t.co/0QpKSnjgnE

Trump added fuel to the fire when he retweeted a photo from one of his supporters comparing the two candidates’ wives.

I didn't start the fight with Lyin'Ted Cruz over the GQ cover pic of Melania, he did. He knew the PAC was putting it out – hence, Lyin' Ted!