A Texas woman’s Facebook post went viral before Hurricane Harvey in which she projected specific details that have been proven eerily accurate with the announcement that 100,000 homes have suffered damaged after more than 50 inches of rain fell during the storm.

Ms. Reisig charged that the Houston City Council knew Hurricane Harvey was expected to do far greater destruction than was being reported to the public – and she forecasted precise data that was officially confirmed on all counts as of yesterday.

Hey guys I’m not trying to start a panic, but as some of you know, I work for a law firm here downtown. One of the lawyers I work with has a friend on the Houston City Council. The news is not telling the whole truth. The storm is expected to be three times worse than what the news is saying because they don’t want a panic on the freeways like Hurricane Rita. The City Council and Harris County Flood Control had an emergency meeting this morning. Everything south of Katy is predicted to be devastated. They’re predicting 50 inches of rain, not 24 like the news is saying and 100,000 homes destroyed. They’re expecting all of Houston to be without power for three days. If you guys live in a flood zone, you need to get out of Houston or try to stay with someone further north of Houston. I hope they’re wrong, but that is the latest I’ve heard from what the news isn’t telling you. Stay safe everyone. 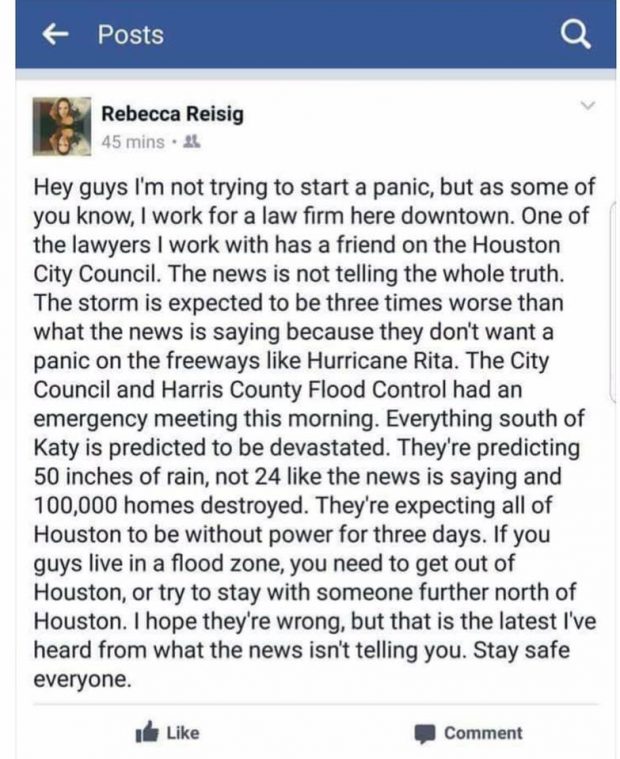 The White House has now confirmed that at least 100,000 homes have been damaged or destroyed by Harvey.

The storm drowned Houston in over 50 inches of rain – a new US record – also just as Ms. Reisig said it would.

“Never before have we seen a storm dump more than 50 inches of rain on a single location in the continental United States,” wrote Infowars contributor, Michael Snyder. “But now one spot in southeast Texas has already received 52 inches of rain, and the rain continues to fall.”

Additionally, Ms. Reisig warned of particularly intensive flooding in a region south of the Katy Freeway, the local name for Interstate 10 which slices through the heart of Houston.

An NOAA real-time flood map reveals this to also be quite accurate: 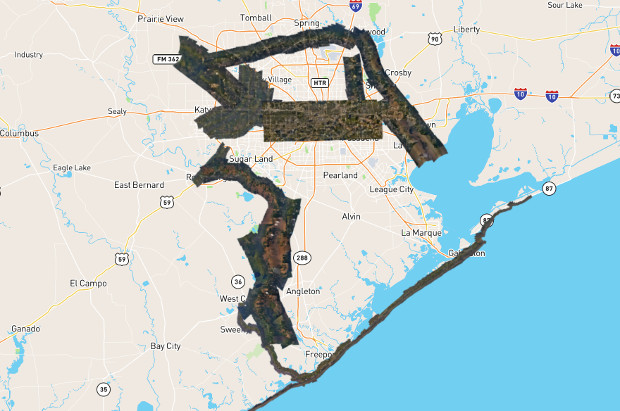 The primary excuse Houston-area officials have given for not evacuating the city – in defiance of recommendations from Texas governor Greg Abbott – was that they did not want to ’cause a panic’ and essentially viewed the task as impossible.

"You literally cannot put 6.5 million people on the road… you are creating a nightmare," Turner says on no mandatory evacuation in Houston pic.twitter.com/Srme3QBn3h

“You literally cannot put 6.5 million people on the road,” said Houston’s Democrat mayor, Sylvester Turner, in a press conference after the storm made landfall. “If you think the situation right now is bad, you give an order to evacuate, you are creating a nightmare.”

Mainstream media, along with Mayor Turner and fellow officials, launched an immediate smear campaign against Ms. Reisig and “false forecasts and irresponsible rumors on social media” after her post went viral, raising many alarm bells in the Houston community. 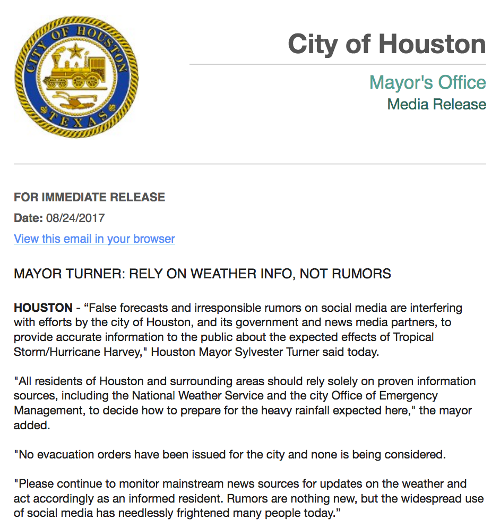 “Harris County officials are batting down false information making the rounds from a Sugar Land lawyer, warning people not to fall for online hysteria,” reported the Houston Chronicle on August 25. “The false information, in an email from the address of lawyer Ross Bale, indicated officials believed the approaching Hurricane Harvey could be far more devastating than first estimated.”

Ms. Reisig’s public shaming effectively sent her into hiding, as she has since deleted her social media accounts, but now many are thanking and praising her – and calling upon mainstream media and Texas officials to formerly apologize and admit their fault.