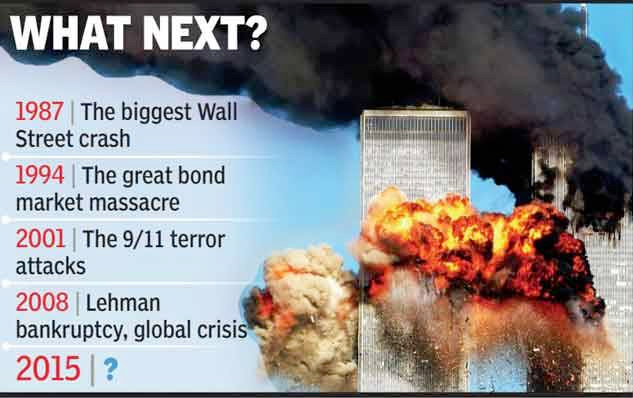 Strange are the ways of the market. At a time when billionaires around the world are counting their losses from the ‘Black Monday’ carnage and governments are looking for every available rule in their books to assuage frail nerves of jittery investors, ‘Shemitah’, a little know Biblical term is keeping marketmen around the world busy.

Meaning the last year of a seven-year cycle in the Jewish calendar, the end of the past several Shemitahs have brought in immense financial hardships to the world. The biggest Wall Street crash, which was in 1987, happened during Shemitah. The 9/11 terror attack happened a day after Shemitah in 2001 and Lehman Brothers filed for bankruptcy and the subsequent 777-point fall in Dow Jones in 2008 also happed around Shemitah.

September 2015 being another Shemitah which ends on Sunday, September 13, and with the global financial market seemingly on a razor’s edge, people from Wall Street to Dalal Street are tanking up on their knowledge of this event from Hebrew history.

From US to India, from UK to Japan, Shemitah (also written as Shemittah and Shemita) is now one of top trending terms on Google. On August 24 and August 25, on Google Trends search for ‘Shemitah’ had a score of 100, meaning 10% or more of all the searches from that region was for this particular word. A Youtube video on the topic that was uploaded about two months ago and deals with an impending financial collapse, has already been seen 1.1 million times.

Watch: Blood moons and eclipses are sensational, but have you heard about the ‘Super Shemitah’? Best-selling author Jonathan Cahn explains The Mystery of the Shemitah, The Biblical Pattern Which Indicates That A Financial Collapse May Be Coming In 2015. Does a mystery that is 3,500 years old hold the key to what is going to happen to global financial markets in 2015?