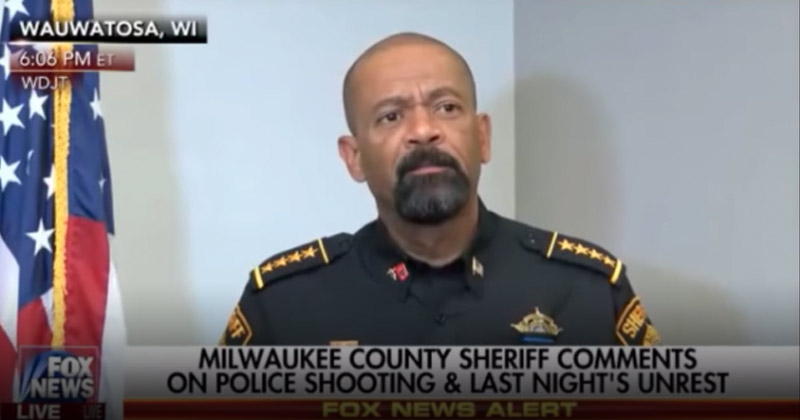 Addressing the weekend violence in Milwaukee that followed an officer-involved shooting, Sheriff David Clarke at a press conference Sunday outlined the cycle which perpetuates the urban violence culminating in civil unrest.

“People have to find a more socially acceptable way to deal with their frustration, their anger and resentment,” Sheriff Clarke said, adding the “war on police” mentality was a “political construct” that had been implemented by the left for a political end.

“Same thing, same model, same subversive groups involved with different names now, different generation of course – as all those folks and the students for a Democratic society got old,” Clarke said.

“Police use of force serves as an igniter — there’s no doubt — but to an already volatile mix of urban pathologies, failed urban policy that exacerbates inescapable poverty, failing public schools, inadequate parenting. Father-absent homes — we all know when fathers are not around to shape the behavior of young boys, they often times grow up to be unmanageable misfits that police have to deal with in an aggressive fashion.”

“We cannot have the social upheaval – the chaos that we saw [Saturday] night that frightens good, law-abiding people in those neighborhoods, that destroy businesses where people work – some probably as a means to support their family.

“We have a growth of the underclass here in Milwaukee. And we saw some of their behaviors on display…

“I’m not going to blast the prosecutor’s office at this point, however, somebody ought to go back and look and see why. There has to be a reason. That’s part of accountability.”