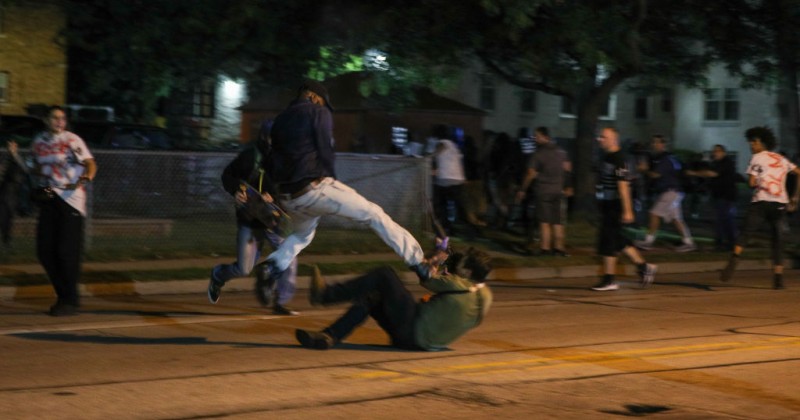 Kenosha County Sheriff David Beth refused to deputize citizens to prevent rioting and mayhem in the city, while police also ordered armed business owners to stop defending their own property.

Three people were shot, two fatally, during a second night of chaos in Kenosha that also saw numerous buildings set on fire and properties trashed.

The unrest is a reaction to the police shooting of wanted felon Jacob Blake, who fought with police, may have been carrying a knife and was also seen reaching into his vehicle before cops opened fire.

With many armed citizens vowing to defend their safety and property from increasingly violent Black Lives Matter agitators, it appears they are not getting much support from authorities.

CONTEXT: I spoke with the alleged shooter earlier in the night who stated he was there to protect property

He did not make racist comments, condemn #BLM, or mention political motivations for his actions

He said that he was there to protect property & was carrying a firearm pic.twitter.com/ViYUB65tiy

The Journal-Sentinel also reported how “a group of armed men with long guns” were observed “standing guard at a dry cleaning business on Sheridan Road near 59th Street, some on the roof.”

Kenosha BLM rioters are throwing rocks at people who are protecting their property. They don’t care that those people are armed. Video by @livesmattershow show. #KenoshaRiots pic.twitter.com/YS6B2mW079

It is not known whether officers made the order of their own accord or were told to give it by Sheriff Beth.

However, Sheriff Beth, when asked whether he would consider deputizing citizens to help police restore order, was unequivocal in his opposition.

Citizens with AR-15’s stopped #BLM rioters from destroying another automobile business. Is there anyone with an IQ over 60 who doesn’t grasp the necessity of the #SecondAmendment by now? pic.twitter.com/zus7fReqwG

The shootings also occurred after Gov. Tony Evers refused help from the Trump administration despite law enforcement requesting back up to keep the peace.

Meanwhile, one citizen made it clear that he would take matters into his own hands.

“This is my fucking town…keep destroying shit…we’re gonna run all you motherfuckers down,” he stated.