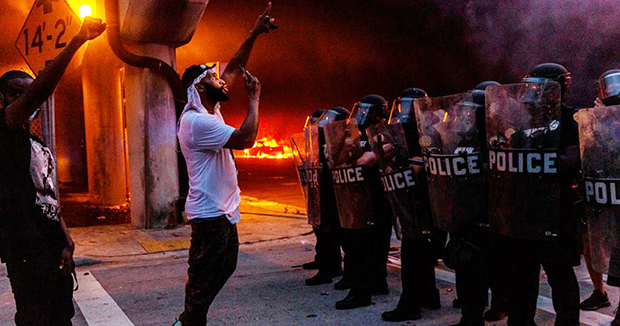 A police officer was stabbed in the neck and several others attacked Saturday at a riot over the death of George Floyd in Jacksonville, Florida.

“They attacked several police officers. They vandalized several police cars, attempting to light them on fire, breaking windows. We have one officer who was stabbed — was slashed in the neck and is currently at the hospital,” stated Sheriff Mike Williams.

The sheriff and Jacksonville Mayor Lenny Curry said the demonstration began peacefully but later took a turn for the worse, according to News 4 Jax.

About 1,200 people came to the event that was scheduled to start at 3 PM, and Williams said the organizers showed “really good cooperation.”

However, after the majority of people went home around 6:30 p.m., about 200 people stayed to confront the police, and that was when the officers were attacked.

Many today peacefully made their voices clear for justice. We hear you and will work with you. But those who remain, causing damage and attacking first responders will not be tolerated.