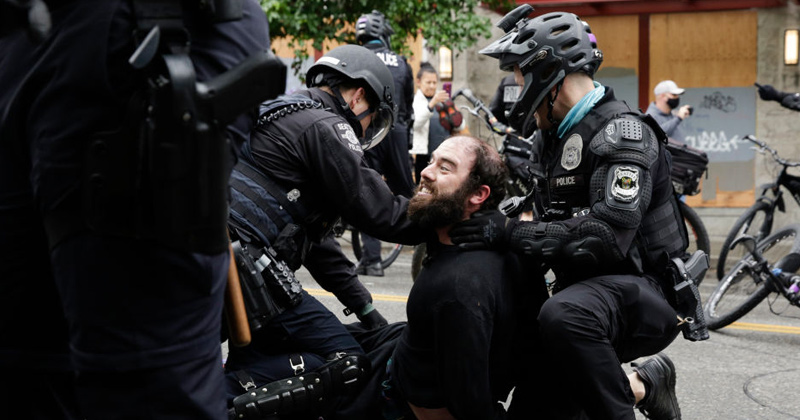 Sheriffs around the country are pushing back against “draconian mask laws” being imposed by local and state governments.

From Texas to Ohio, as well as several other states, law enforcement officers are speaking out about the difficulty of enforcing such orders and questioning the legality of the decrees altogether.

Following Texas Governor Greg Abbott’s executive order requiring face masks to be worn when “in public,” several police officials announced they will not enforce the mandate.

Sheriffs in Houston, Gregg, Montgomery, Panola, Upshur, Gillespie, Kerr, Nacogdoches and Denton counties have all made public statements on the matter.

Denton County Sheriff Tracy Murphree explained his decision on Facebook, writing, “The order is not a law, there is no requirement that any police officer enforce it, and it’s unenforceable. We can’t spend our time running from place to place for calls about mask we can really do nothing about.”

Houston Police Officers’ Union President Joe Gamaldi also shared his opinion, writing on Twitter, “While we in law enforcement are desperately trying to build trust w/our community and are spread incredibly thin with the huge rise in violent crime, we are now expexcted to enforce yet another draconian mask law. Everyone needs to wear a mask, but don’t put us in this position.”

While we in law enforcement are desperately trying to build trust w/our community and are spread incredibly thin with the huge rise in violent crime, we are now expexcted to enforce yet another draconian mask law.

Everyone needs to wear a mask, but don’t put us in this position.

“This language strips law enforcement of the necessary tools to enforce compliance with the law,” the office wrote on Facebook.

The Montrogmery County Sheriff’s office also explained that stopping individuals in order to write citations is defined as detention under current Texas law, which could subject officers to civial liability.

In Ohio, Butler County Police Sheriff Richard K. Jones told CNN on Wednesday, “I’m not going to be the mask police,” when asked about the state’s mandatory face mask order.

He added, “I’m telling people don’t call 911. All the police have been decimated as far as being laid off, having budgets cut and I am not going to enforce the mask wearing.”

See the interview below:

“We’d like to remind the public that 911 should only be used in the case of an emergency to ensure that those who need immediate, life-saving help can get the attention they need without delay,” he said. “Please do not call 911 to report people who may not be complying with the mandated mask order.”

Ohio’s Norwood Police Department also told citizens to call the Health Department as officers “will not be enforcing” the order.

“The Norwood Police Dept will not be enforcing this Health Dept order and ask if you have concerns to please call our Norwood Health Dept and not our non-emergency line or E-911. We will assist our Health Dept if they request assistance,” a statement read.

Three sheriffs in North Carolina have announced their refusal to enforce the state’s mandatory mask order with one county Sheriff’s Office saying they “will not be taking enforcement actions to wit, issuing citations against people or businesses for not wearing masks.”

“The wearing of a mask is a personal decision, not one of a governor in Raleigh,” Halifax County Sheriff Wes Tripps explained.

North Carolina’s Craven County Sheriff Chip Hughes went to Facebook to tell citizens his deuputies “will not be taking enforcement actions against people or businesses for not wearing masks!”

Another North Carolina sheriff wrote on Facebook, “It is my belief that Governor Cooper’s executive order mandating face coverings by all citizens in public is not only unconstitutional, but unenforceable.”

“My deputies will NOT enforce an executive order that I feel violates the constitutional liberties of citizens,” Sampson County Sheriff Jimmy Thompson continued. “I am not encouraging negligence, but I would like to reiterate that it is not the Sheriff’s duty to enforce health related mandates unless court ordered by a Judicial Official or the Legislature.”

A Washington state sheriff, Robert Snaza of Lewis County, made a statement during a viral video released in late June, saying, “In case you guys didn’t hear, Governor Inslee, in his infinite wisdom, has decided after over a hundred and some odd days that we should all wear face masks — inside and out. Here’s what I say: Don’t be a sheep.”

If more law enforcement agencies stand up for the Constitution and the rights of Americans and refuse to enforce mandatory mask orders, what will overzealous politicians do next?