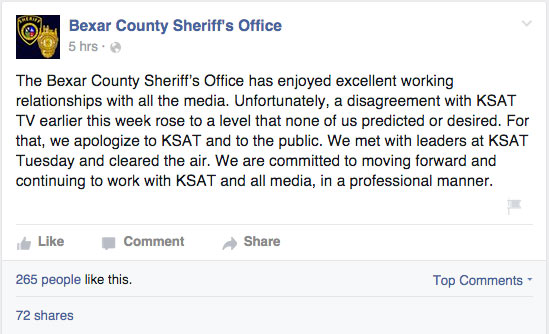 An embattled Texas sheriff’s department is saying it’s sorry after it reprimanded a local news group for airing footage showing two of its deputies gunning down a man who appeared to have his hands raised.

Earlier today, the Bexar County Sheriff’s Office issued an apology to ABC News affiliate “KSAT and to the public” for their treatment of the news agency following their release of exclusive footage featuring an officer-involved shooting that left a man dead.

“The Bexar County Sheriff’s Office has enjoyed excellent working relationships with all the media,” a statement on Facebook reads. “Unfortunately, a disagreement with KSAT TV earlier this week rose to a level that none of us predicted or desired. For that, we apologize to KSAT and to the public. We met with leaders at KSAT Tuesday and cleared the air. We are committed to moving forward and continuing to work with KSAT and all media, in a professional manner.”

The shocking cell phone video in question, obtained from a resident by KSAT Friday, appears to show the moment a domestic violence suspect is shot dead by police.

The footage, which was published unedited that day but does not show moments prior to the incident, features two police officers following a man onto the front yard of a property outside of San Antonio.

The man, 41-year-old Gilbert Flores, appears to put his hands in the air before he’s gunned down by one or both officers.

Police claimed they had attempted to deploy non-lethal force to subdue the suspect, including using tasers and riot shields, and that Flores had attempted to “resist and fight back,” however, none of those purported actions were viewable on KSAT’s video.

Following release of the damning footage, the sheriff’s office publicly condemned KSAT for publishing the video, labeling their actions “unethical, sad” and “sensational,” and claiming their deputies were now receiving physical threats.

The sheriff’s office also published KSAT’s phone number and encouraged its Facebook and Twitter followers to call the news agency.

“Would you want your loved ones to see your death? What about the investigation being jeopardized by a video that doesn’t share the whole story? It’s about doing the right thing. This is only one piece of evidence,” one Facebook reply from the sheriff’s office states.

People on Facebook overwhelmingly disagreed, with one user stating, “This one piece of evidence is reason why these two officers deserve to be prosecuted for homicide.”

Yesterday Bexar County Sheriff Susan Pamerleau announced the existence of a second video of the altercation which shows that Flores had a knife. Another source told CNN the footage shows the suspect was acting “wildly aggressive.”

On Tuesday, the FBI said it would also investigate the incident “to determine whether a civil rights violation took place as a result of a deputy willfully engaging in the use of excessive or unjustified force.”

Many across the country have lauded KSAT’s commitment to the First Amendment and freedom of the press for publishing the controversial footage clearly in the public’s interest.

“BCSO should rather focus on having ‘excellent working relationships’ with due process of the law and the Constitution. It’s not the media’s job to cover up questionable shoots by your officers that, even if they’re justified, still deserve to be scrutinized by the taxpaying public,” Infowars writer Kit Daniels commented on the Bexar County Sheriff’s Office Facebook page.