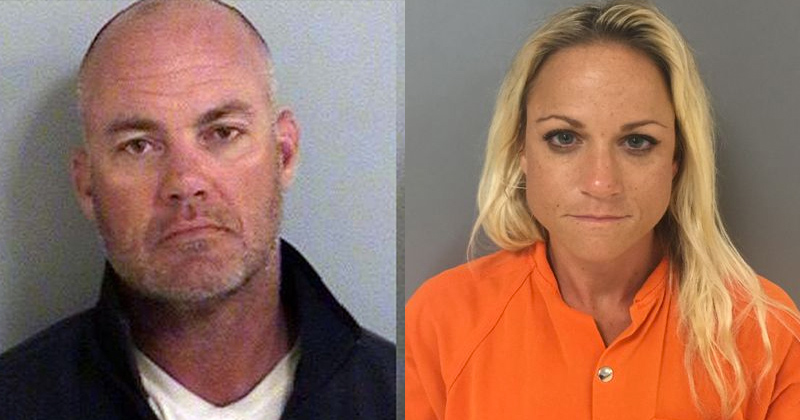 A Louisiana sheriff’s deputy and his wife, a local middle school teacher, were arrested late last month and each charged with 60 counts of producing child pornography.

The married couple, Dennis AKA “Denny,” 44, and Cynthia Perkins, 34, were nabbed on October 23 on a litany of sex crimes, including child rape charges.

“Among the evidence seized in the case are photos that show the two suspects nude with an unclothed child, a source familiar with the case said,” reported local Fox affiliate WAFB.

Other charges against Denny, who is held on $1.6 million bail, include obstruction of justice, “three counts of possession of pornography involving a juvenile under the age of 13, two counts of video voyeurism, and two counts of obscenity,” WAFB reports.

“Cynthia Perkins is charged with 60 counts of production of pornography involving a juvenile under the age of 13 and two counts of first degree rape. She’s being held on a $500,000 bond.”

State and local police organized the arrests following a tip from the National Center for Missing and Exploited Children, which received a report of suspected distribution of child pornography.

Perkins, who headed the department’s SWAT team, was arrested while on a fishing trip in northern Louisiana, where he reportedly tossed his cellphone into the water.

He was a longtime Livingston Parish Sheriff’s Lieutenant serving for 20 years, and never had a history of problems, prior to his termination, according to Sheriff Jason Ard.

It was later revealed an ex-girlfriend of Perkins had filed a police report in 2011 accusing him of stalking her.

Documents released by the sheriff’s office also revealed Perkins was still hired on by the department, despite being deemed “high risk” following a polygraph survey, where he admitted to stealing items from a store and property from a previous employer.

Cynthia Perkins resigned from her job at Westside Junior High School, where she taught for seven years, shortly after her arrest.

Parents of students at the school were upset they were never informed about the teacher’s arrest.

“I didn’t get a phone call from the school, an email, a letter or anything,” the parent of an 11-year-old student said. “I’ve only seen what’s flying around Facebook.”

The school evidently released a statement on the day Perkins resigned:

“An employee of Livingston Parish Public Schools has resigned today as the result of an ongoing investigation by law enforcement.

“Livingston Parish Public School officials became aware of the investigation early this morning and met with the employee, at which time the resignation was rendered and accepted.

“Livingston Parish Public Schools is committed to the safety and security of all students and employees and is committed to working with the proper authorities as needed through the course of this investigation.”

Following Denny’s arrest, the Livingston Parish Sheriff’s Office released a statement where Sheriff Ard referred to Perkins as a “friend and a family member.”

“Denny Perkins was terminated when Livingston Parish Sheriff Jason Ard was made aware of charges & evidence provided by investigators with the Attorney General’s Office.

“It is a sad day for us, for all law enforcement officers, when you arrest one of your own. We at the LPSO work hard every day to retain the trust placed in us by our citizens. I understand this was a veteran law enforcement officer, one who had dedicated a lot of time & effort into this community, but as I have said in the past – no one is above the law. This type of alleged behavior will not be tolerated by me or anyone at the LPSO. I do not condone these alleged acts. I am disappointed. I have always considered Denny a friend & a family member. The Attorney General’s Office is leading this investigation. We are assisting & offering to cooperate in any way we can.”

About a week after he released the statement, Sheriff Ard attempted to clarify his controversial defense of Perkins at a press conference held last week:

“This guy was a friend, and right now, he is a criminal,” Ard stated. “I am ashamed of what he did, and he should be, too.”

“This is a monstrous act.”

During the contentious press conference, Sheriff Ard was asked why the department never looked into allegations against Perkins brought forward in 2013 by Baton Rouge Police Lt. Todd Webb, who had approached the sheriff with concerns brought up by his stepdaughter after a sleepover at Perkins’ home. Ard responded Lt. Webb had never filed a report against Perkins, and that at the time there was no crime to investigate.

In an interview with WBRZ, Lt. Webb detailed how we regretted not formally filing a complaint after a counselor told his family Perkins was attempting to groom his stepdaughter.

“They have a lot of good people who work there, a lot of good deputies. And it just concerns me that I’ve seen other things in the media come out and it makes me wonder how this man was not looked at before. What has really bothered me is, like I said, I felt like, ‘Could I have done more in 2013? Could I have done an interview like this in 2013, and maybe more people would have come forward? And what has that man done since 2013 til now? How many people have been hurt from 2013 to now?'”

Lt. Webb went on to say he was also concerned for the safety of his family and detailed an instance of intimidation by Perkins after he reported the incident to the sheriff.

During the press conference, Sheriff Ard said after he received the complaint he personally interrogated Perkins, who denied the charges, and went on to call Officer Webb “a disgrace to the badge” who should be “ashamed” for not putting his concerns on paper, and for identifying his stepdaughter as a victim.

Sheriff Ard was also asked why the girl’s mother had not issued a complaint, after which she released a statement saying she never reported the incident with her daughter because Perkins had not done anything “illegal.”

“In 2013, it was brought to my attention that Denny Perkins crawled into bed in the middle of the night with my 11-year-old daughter. My only concern, then and now, is my child. I immediately brought her to a counselor. My husband at the time was handling the legal side of it and went to the sheriff. There was no reason for me to ‘come forward’ to file a complaint, as he was handling that part of the situation.”

While no precise details have been released, rumors on popular Louisiana forum TigerDroppings featuring posts from a Livingston Parish Crime Facebook page allege Perkins “set up cameras all over” his house, which captured him performing sex acts with a child as young as eight. 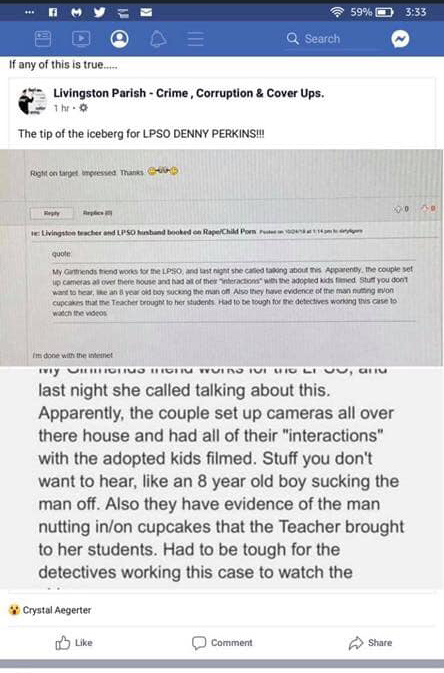 Perkins has hired high-profile defense attorney J. David Bourland, who claims his client is “an innocent man.” His next scheduled court date is on December 19 at 1 PM.