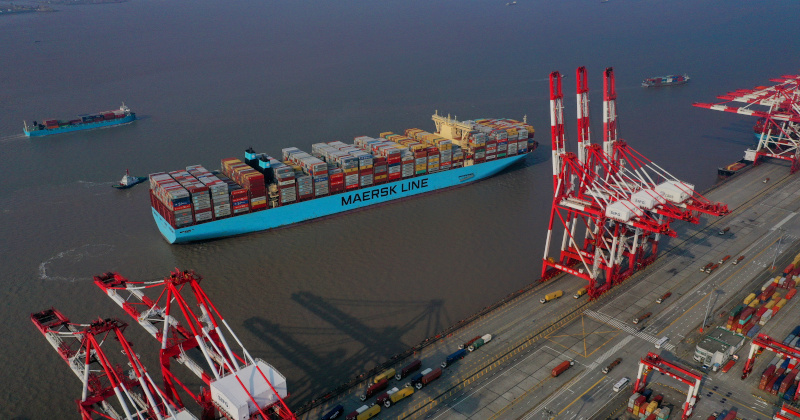 A.P. Moller-Maersk A/S, the world’s largest container shipping company, warned Thursday that the Covid-19 outbreak in China, and quickly spreading across the world, would hit earnings this year.

Maersk said factories in China are currently operating at 50-60% of capacity because the economy has ground to a halt.

Maersk reported an unexpected loss in the fourth quarter of $72 million from a profit of $46 million a year earlier. The shipper is a barometer of global trade, said revenues declined 5.6% to $9.67 billion, missing expectations of $9.4 billion, due mostly to a decline in container shipping.

Shipping volumes in both East to West and North to South routes were lower amid several years of front-loading by corporations ahead of President Trump’s tariffs. Lower demand was seen across Europe, Latin America, the US, and across Asia Pacific countries last quarter.

The shipper said 2020 guidance is filled with many uncertainties because the deadly virus can still spread outside of China and impact the global economy.

“As factories in China are closed for longer than usual in connection with the Chinese New Year as a result of the COVID-19, we expect a weak start of the year,” Maersk warned.

“The slow start could be dampened further,” the WTO said in the report, “by global health threats and other recent developments in the first few months of the year, which are not yet accounted for in the barometer’s best-available historical data.”

“The latest barometer reading does not indicate a sustained recovery,” it said. “Indeed, year-on-year trade growth may fall again in the first quarter of 2020, though official statistics to confirm this will only become available in June.”

The decline in global trade was seen in container shipping, agricultural commodities, and automotive products index, the WTO said.

Soren Skou, Maersk’s chief executive, told the Financial Times that China could be operating at 90% capacity by March 2. Still, he noted that a lot of “things could go wrong,” such as labor and part shortages to logistics transportation, had been a nightmare for many factories in preventing them from a complete factory restart.

There’s also the problem that manufacturers are running out of capital to cover labor expenses.

All of this means the timelines of factory restarts in China will continue to be pushed out.

Maersk expects global container demand to be around 1% to 3% this year. This is below the rate seen before the 2008/09 financial crisis, as well as 3.8% seen in 2018, suggesting the global economy is rapidly slowing.

The HARPEX (Harper Petersen Charter Rates Index) reflects the worldwide price development on the charter market for container ships. Companies pulling forward goods ahead of President Trump’s tariffs boosted rates for much of 2018 and 2019.

However, the signing of the Phase One trade agreement has calmed trade uncertainties and declined the need for corporations to pull forward. What could happen next is the HARPEX plunges as the demand for container ships sinks as China’s economy is paralyzed.