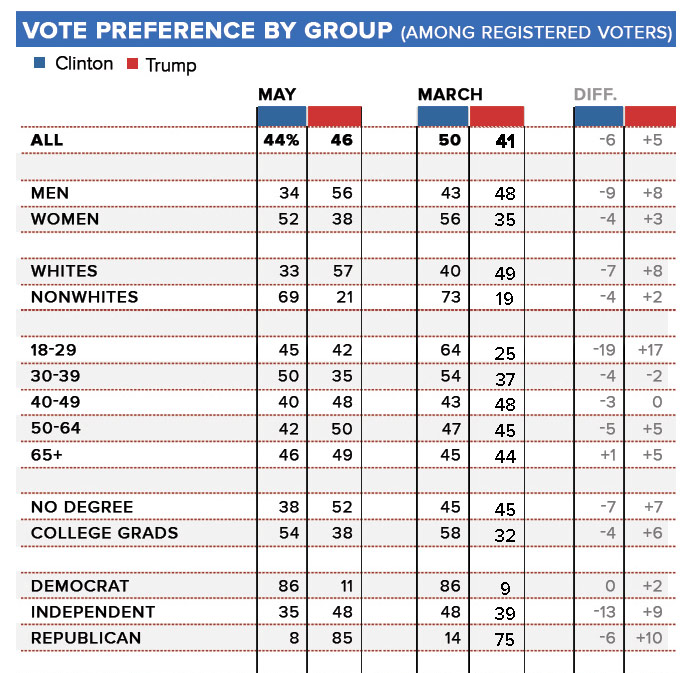 Young voters – and liberals – are ditching Clinton in mass in favor of Donald Trump, which may foreshadow a Trump landslide in November.

Since March, Trump has gained 17% in support from voters aged 18-29 whereas Clinton has dropped 19% in that same demographic, according to an ABC poll which explains why Trump has gained five points on Clinton.

In other words, Trump has gained 90% of young voters who previously supported Clinton.

“Mitt Romney lost the youth vote to Barack Obama by more than 20 percent, and even a 10 percent Democrat margin would still ensure a decisive victory for Trump,” Ron Meyer of Red Alert Politics reported.

Trump is gaining Bernie Sanders voters who are disgusted by how Clinton is outright stealing the nomination despite Sanders being a much more popular candidate.

Bernie voters are also disgusted by “crony capitalism” – which really isn’t capitalism – on Wall Street, and given how Clinton’s largest donations come from Wall Street, it’s actually not that surprising why Bernie voters would choose Trump instead.

“Even as Hillary Clinton has stepped up her rhetorical assault on Wall Street, her campaign and allied super PACs have continued to rake in millions from the financial sector, a sign of her deep and lasting relationships with banking and investment titans,” the Washington Post admitted back in Feb. “Through the end of December, donors at hedge funds, banks, insurance companies and other financial services firms had given at least $21.4 million to support Clinton’s 2016 presidential run — more than 10 percent of the $157.8 million contributed to back her bid, according to an analysis of Federal Election Commission filings.”

Megabanks have also donated at least $40 million to the Clinton Foundation, with Barclays, Barclays Capitol, Goldman Sachs and Citi each giving up to $5 million, and Clinton has earned at least $21 million in speaking fees from financial institutions.