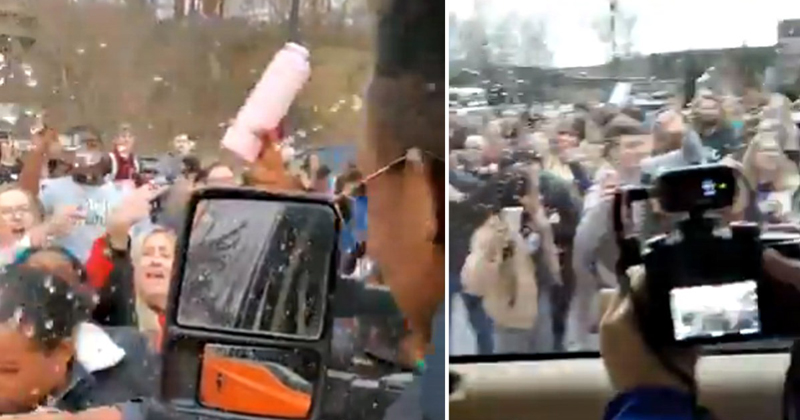 While attempting to visit Ohio University, Kaitlin Bennett’s vehicle was attacked by college students punching and shaking the vehicle, and with drinks thrown into an open window, while police sat in cruisers within walking distance and did nothing.

Students surrounded Bennett’s vehicle, first screaming obscenities and making obscene hand gestures toward Bennett and her crew, and then began to approach the vehicle.

Some students continued screaming, while others began attempting to shake the vehicle and punching and slapping it.

Moments later, several students began hurling what appeared to be either drinks or milkshakes, evoking images of conservative journalist Andy Ngo being attacked after first being blinded by milkshakes last year.

The beverages were hurled through an open window, landing in the vehicle.

“Why is that cop just letting this happen,” said one of the passengers.

“That cop is the one, he told me Justin, he told me he will not help me,” said Bennett. “These cops are watching this happen. There’s another one.”

Police were mere feet away from the college students as they attacked the vehicle, and did not intervene.

Bennett posted a video of the incident to Twitter and wrote, “This is what happens when a Trump supporter goes to a college campus.”

“Leftists at @ohiou started a riot when @Joelpatrick1776 and I showed up, and the @oupolice let it happen,” said Bennett.

“I think @realDonaldTrump should strip funding from universities like this that harbor terrorists.”

This is what happens when a Trump supporter goes to a college campus. Leftists at @ohiou started a riot when @Joelpatrick1776 and I showed up, and the @oupolice let it happen. I think @realDonaldTrump should strip funding from universities like this that harbor terrorists. pic.twitter.com/5TMlfdto9O


Bennett seemingly refers to a recent executive order signed by President Donald Trump that would strip colleges and universities of federal funding if they did not protect the First Amendment on their campuses.

“We went there to film a President’s Day Trivia video, similar to my other trivia videos on Liberty Hangout,” Bennett told National File. “We were only able to ask one person one question before a mob started to form and eventually turned into a riot.”

Bennett explained that the video only shows the portion of the violence that occurred once she was able to get to her vehicle.

“They started throwing objects at us, hitting me in the face several times. They dumped hot coffee on me, and then several other beverages on my friend Joel Patrick,” said Bennett.

“When we finally made it to our ride, they were jumping on the truck and beating the windows trying to break it.”

Bennett told National File, “What’s important for anyone reading this to understand is that they treat me like this because they know my opinions.”

She added, “They would do the same to any other conservative.”