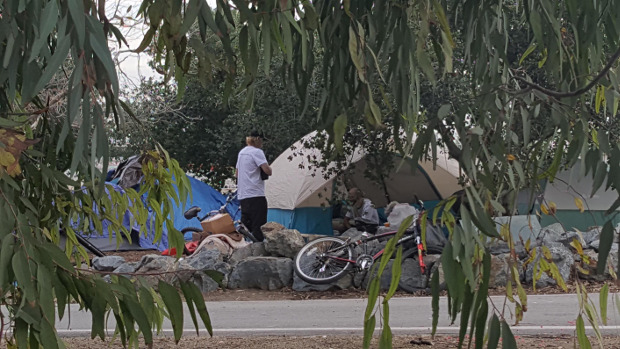 Citizen journalists have captured stunning video and images of homeless encampments that are spiraling out of control in the shadows of Disneyland and Anaheim Stadium in California.

The tent city has recently sprung up along the Santa Ana riverbed, near a busy convergence of three major California highways known as the “Orange Crush,” at the border of Anaheim and Santa Ana, the latter a “sanctuary city.”

Homeless activists estimate that as many as 1,000 people are camped in the region. 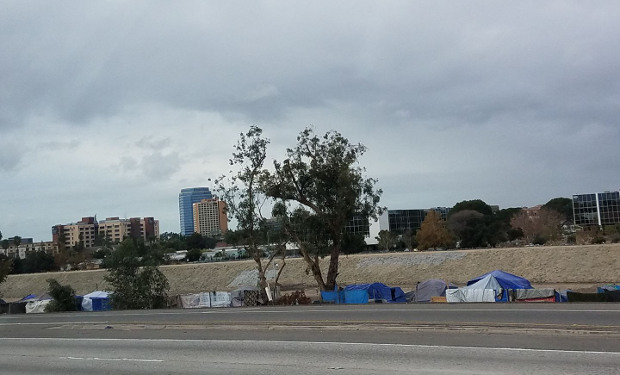 Locals have become increasingly alarmed by the rapid spread of unregulated squatters and their belongings – and their waste.

“As a cyclist who uses the trail to ride to the beach often, over this last year it has gotten substantially worse,” an Orange Co. resident told Infowars. “It is unsafe and unsanitary with loose dogs everywhere and human fecal matter scattered on the trail.”

“The area is disgusting and reeks of trash and feces.”

He reports that the bike trail, once popular with outdoors enthusiasts and families which runs for miles to beaches along the Pacific Ocean, has become unsafe as miscreants plot assaults and robberies on passing riders, even laying tripwires across the path.

County and city officials are well-aware of the unfolding crisis, but seem to be turning a blind eye.

A lawsuit filed by the ACLU claims that local police in multiple cities have made it policy to advise homeless to move to the riverbed region to avoid citation or arrest.

The suit, which claimed that Orange Co. was ‘unconstitutionally imprisoning’ the homeless when they attempted to erect fences as part of an on-going flood prevention project, provides a look at how groups like the ACLU are contributing to the banana republicization of California and the nation at large.

“First Defendants and other law enforcement agencies direct individuals to the Santa Ana Riverbed, then they falsely imprison them by literally building fences around them that make it impossible for them to leave…such a Kafkaesque system cannot stand and is not lawful,” read the suit.

A settlement was reached shortly after, leaving taxpayers on the hook for the ACLU attorney fees.

Governor Jerry Brown and his coterie of fellow travelers invest over $25 billion per year in illegal immigrants, the Washington Times reports.

Ballot Pedia reports that, “Between fiscal years 2014 and 2015, total government spending in California increased by approximately $41.7 billion—from $210.9 billion in fiscal year 2014 to an estimated $252.6 billion in 2015.” And estimates for Brown’s on-going pet project, the “bullet train to nowhere,” are pushing $100 billion.

As Democrats move towards official “sanctuary state” status and #CalExit, California is coming apart at the seams, structurally, financially and culturally due to socialist policies that have degraded the once-great state for decades – the same kinds of policies that Barack Obama and his failed successor, Hillary Clinton, have worked to implement at the federal level in an effort to turn the entire country into one giant California.

“As California goes, so goes the nation…”