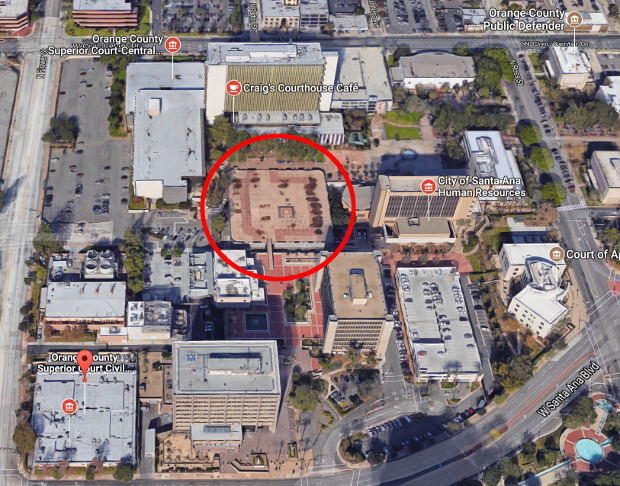 Citizen journalists have released shocking video of a large migrant encampment that has formed in the shadows of Orange County, California’s key government buildings, including multiple courthouses, in the city of Santa Ana.

Activist Legal Latino Heat posted the stunning footage in which the fully operational tent city packed with migrants, drug addicts and their pets sprawls across the Plaza of the Flags situated in the heart of the Santa Ana Civic Center, which serves as the nucleus of government operations for all of Orange County.

“Wow, this is America,” narrates the cameraman. “At least they’ve got security,” he adds, showing the police presence patrolling the camp.

“This is a sanctuary city, ladies and gentlemen… in between the courthouses, we have all these lawyers and everything, and this is how people are living.”

“Why do you want more illegals to come into this country – so they can live like this?” he asks.

Encountering a police officer, he inquires, “Officer, they just live up there?”

The journalist remarks repeatedly about the scent of urine pervading the encampment and surrounding area, which has been formally declared a “public health and safety crisis” by the Santa Ana City Council.

“Officials said that the homeless population in the area swelled beyond 400 earlier this year,” reported the LA Times in September. “They are worried that the Civic Center complex is unsafe for the area’s more than 15,000 government workers, many of whom have complained of feces, urine and trash on the sidewalks, including syringes.”

Instead of ejecting the tent city’s inhabitants and returning the plaza to its original safe and clean condition, the city council passed a resolution directing the City Manager to draw up a $1.3 million budget plan to “improve lighting in the Civic Center area, ensure 24/7 police patrols, hire more security guards, relocate a needle exchange program, power wash regularly and boost staffing for departments that enforce code violations or prosecute crimes.”

The Santa Ana City Council also unanimously adopted an ordinance to cement its position as a ‘sanctuary city’ as an open rebuke of President Trump just days before he took office.

“For us, it’s about shifting the narrative. Trump is asking to deport the most vulnerable,” said Roberto Herrera, a community organizer who lobbies on behalf of illegal aliens. “For us, Santa Ana will stand strong and be there for us, for the most vulnerable.”

Earlier this year, Infowars exposed the homeless crisis unfolding in nearby Anaheim, California, after video surfaced of another tent city that had sprung up along the Santa Ana riverbed.

As Democrats move towards official “sanctuary state” status and #CalExit, California is coming apart at the seams, structurally, financially and culturally due to socialist policies that have degraded the once-great state for decades – the same kinds of policies that Barack Obama and his failed successor, Hillary Clinton, have worked to implement at the federal level in an effort to turn the entire country into one giant California.