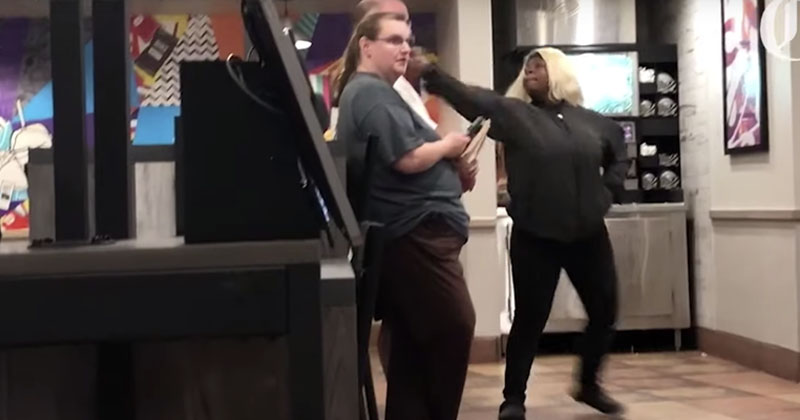 A woman has been sentenced to seven years in prison for slashing a man’s throat in front of his family at a Taco Bell after he asked her to stop ranting at employees for taking too long on her food.

The victim, 48-year-old Jason Luczkow, told The Oregonian Thursday that he and his wife went to a Taco Bell along Highway 26 in July to pick up some food for the family when the errand took a horrifying turn, which was miraculously caught on video.

Caley Mason, 22, of Maryland pleaded guilty in Clackamas County last month to second-degree assault in the brutal knife attack that left Jason Luczkow, 48, with an 8-inch gash from ear to Adam’s apple.

The beef began after Luczkow, a Sandy resident, said he asked her to stop berating the Taco Bell employees.

Mason, attired in a blond wig, was already making a scene when they arrived, according to Luczkow and the Sandy Police Department. She continued to fume over how long it took to get her food.

“Apparently, the management had already told her to leave,” Luczkow said. “As she continued to rant and rave, I told her to be quiet. Told her to zip it.”

After exchanging a few words, Mason stormed out of the restaurant, police said. She returned a few minutes later with a knife and slashed the man who had told her to pipe down, Det. Sam Craven told The Oregonian/OregonLive.

That’s when blood began to pour from Luczkow’s neck and Mason fled.

Luzckow said Mason sped off in a silver Kia Soul that almost ran over his wife, who had pursued the knife-wielding woman.

The suspect’s blond wig was no longer on top of her head.

“My wife thought I was playing a practical joke with the hot sauce packets,” Luzckow said. “Needless to say, I didn’t get my order that night.”

“She missed my jugular, missed my carotid artery by millimeters,” he added. “It’s gruesome. It looks like I’m dead.”

Mason was already on state supervision for a previous armed robbery conviction in Maryland, after mugging a pizza deliveryman at her home, according to prosecutors.

Though the gruesome news story should be widely covered by the media (regardless of the attacker’s race), because the attacker was a black woman and the victim was a white man, the mainstream media will likely ignore it because it doesn’t fit their desired race baiting narrative.

Guest Host Mike Adams takes you through some pointers for surviving a zombie attack, or other potentially dangerous scenarios.