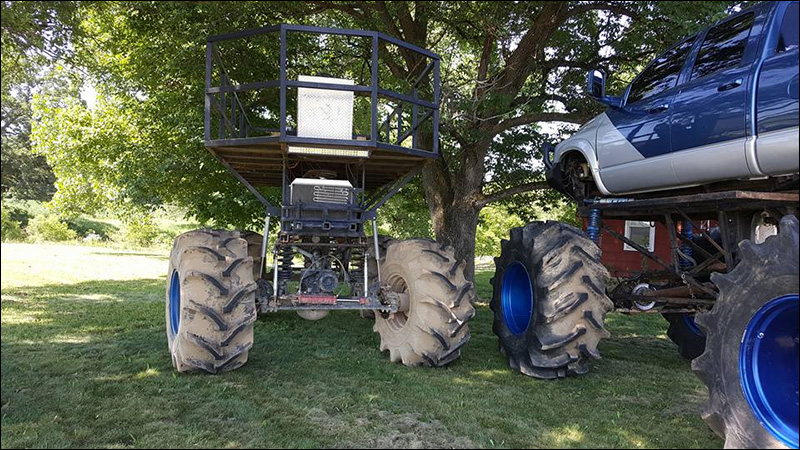 A video featuring a uniformed police officer turning away volunteers who were rescuing Hurricane Harvey flood victims has infuriated the online community.

The video, which has been viewed over 4.6 million times on Facebook, shows an officer shouting at volunteers Jared Kirkendoll and Scott Green in Vidor, Texas, where the men were using a monster truck to rescue residents from flood waters.

So this just happened. Jared Kirkendoll and Scott Green was just told that they have to leave vidor because they are not needed here.. but yet they are doing more than any off the law enforcement is doing here. This is the biggest crock of bullshit ive ever heard. Fuckin power trip. Helping people and get treated like that. Oh and as you can see he was a total ass hole.For licensing or usage, contact [email protected]

“Is this your vehicle?” the officer asks one of the men, who responds, “Yes.”

“I need you to come down here,” the officer demands.

“For what?” the man replies.

“Because I said so!” the officer angrily yells.

A photo of the vehicle in the video shows it was suitable and more than capable of performing high water rescues.

The officer proceeds to ask for identification and has an unintelligible conversation with the man, after which the truck driver agrees to leave the area.

Many on Facebook were infuriated by the officer’s behavior towards a helping hand, and questioned why he would turn away help during such a dire situation.

“The people that live there need to show this video and demand answers,” one Facebook user said.

“How about you treat people with respect you piece of sh*t,” stated another user, with another person commenting, “Freaking unbelievable! What a creep!”

The Vidor Police Department on Saturday distanced themselves from the officer in the video, saying he is not employed by the agency.

We have been made aware of a video floating around social media. This officer is not employed by the Vidor Police…

“We are thankful for all the volunteers who have left their families to save ours,” Vidor PD wrote on their Facebook page. “These men and women have used their own equipment, tools, gas, and money without asking for anything in return!!!”

While Vidor PD responded to the incident, the Orange County Sheriff’s Office has yet to address the matter after users identified the officer as Detective Christopher Pearson.

A crucifix stands in front of a flooded church in the aftermath of Tropical Storm Harvey in Vidor, Texas. pic.twitter.com/kKXuMgUyoN

The Orange County Office of Emergency Management reported Sunday that 9 storm related deaths had occurred in the area.

.@MarthaRaddatz flies over Vidor, Texas where houses are submerged in the aftermath of #Harvey. More on a special edition of @ThisWeekABC. pic.twitter.com/MJ4Com4aJP

On Monday former Congressman Ron Paul warned about the dangers of accepting emergency aid from federal, state and local bureaucracies, who he says can often make matters worse.

“Following natural disasters, individuals who attempt to return to their own property — much less try to repair the damage — without government permission can be arrested and thrown in jail. Federal, state, and local officials often hinder or even stop voluntary rescue and relief efforts.”