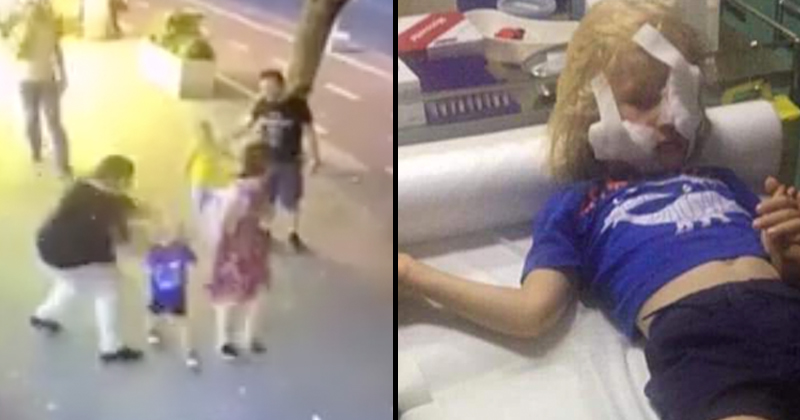 Video out of T’bilisi, Georgia shows the moment a large woman snaps and randomly stabs a three-year-old child in the face as he walks down a sidewalk holding his mother’s hand.

Woman stabs a three year old child in the face as he walked with his parents.

Both parents are so shocked they take what seems like an eternity to act on the threat.

Moving everyone away safely is the most important thing here. pic.twitter.com/0ahFsipGNW

Footage of the Wednesday incident shows a family going along minding their own business when the woman, who was walking in the opposite direction, unexpectedly turns and begins stabbing a young boy.

The woman next attempts to do the same to the boy’s young sister.

The children’s father attempts to confront her, but is intimidated by the woman’s large butcher knife.

She then proceeds to cross the street as though nothing happened.

The boy required stitches due to deep wounds in his nose and right cheek.

The child, had deep wounds in the nose and right cheek. He received stitches and has since been discharge from hospital. pic.twitter.com/RYuWC1ISIx

The suspect was only identified by her age, 51, mentioned in a report by Sputnik Georgia.

According to author David Videcette, the woman was arrested and faces seven to 10 years in prison.

The woman, described as a 51-year-old, unemployed artist escaped from the scene, but was detained by the police the following morning.

She faces seven to ten years in prison. pic.twitter.com/5cczQNF6Dt

A report referenced by LiveLeak.com described the woman as “an unemployed artist born in 1968.”