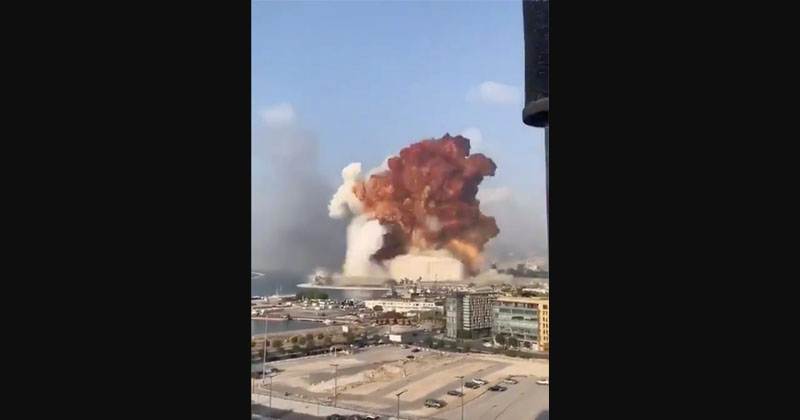 Dozens of videos out of the Port of Beirut in Lebanon flooded social media Tuesday showing a massive explosion engulf a large part of the city.

Footage from nmumerous vantage points throughout Beirut show a billowing column of smoke rising out of a warehouse near Port 12 from a smaller explosion when a sudden more powerful explosion vaporizes several buildings accompanied by a forceful shock wave.

Another video I took of the massive explosion near #Beirut’s port. pic.twitter.com/MNt3wiNTLN

Turns out there were two blasts, here’s the documentary evidence | pic.twitter.com/4Nug4azYkJ

A unique angle of the #Beirut, #Lebanon Port Explosion showing the scale and power of the shockwave caused. pic.twitter.com/jkM0fOkgsV

Witnesses from as far as the Mediterranean island of Cyprus, 143 miles off the coast of Beirut, also saw and felt the explosion, ABC reported.

Video of the blast moments ago at #Beirut port. People across Beirut reporting windows blown out, doors blown off – absolutely massive explosion. pic.twitter.com/dyTZ1uXzYf

Incredible close in view of the explosion in Beirut today#Lebanon #Beirut pic.twitter.com/5nhD4pZzMj

Lebanon’s state-run National News Agency reported that the explosion occurred in a fireworks warehouse, and some closer footage of the area does show fireworks going off before the big explosion hits.

Extremely close up video of the #Beirut Port explosion shows the fireworks before the larger explosion. pic.twitter.com/bKmcjaJnLq

One Beirut witness who was several miles away from the site of the blast said her windows had been shattered by the explosion.

“What I felt was that it was an earthquake,” Rania Masri told CNN.

“The apartment shook horizontally and all of a sudden it felt like an explosion and the windows and doors burst open. The glass just broke. So many homes were damaged or destroyed.”

The Lebanese Health Minister said there were a “very high number of injuries” from the blast.

A reporter from France 24 claimed that all the buildings on her block were “completely destroyed”, and that everyone was “covered in glass and blood.”

All the buildings in my block are destroyed. Huge explosion in #Beirut. Everyone covered in glass and blood. https://t.co/KlqRPmdmUE

"What is clear is that there was one, possibly two, very, very large explosions. This is in an area down by the port area. Some of those buildings are used for storage," @IanPannell reports on a massive explosion in Beirut. https://t.co/NDkL41W1Iq pic.twitter.com/bc7tENFmaI

Footage of the aftermath shows the staggering scale of the destruction left behind by the blast, with some cars flipped completely over and whole neighborhoods heavily damaged.

My sisters father just sent us this video from Beirut. Wow. pic.twitter.com/SzsQ1pojl6

Fully destroyed. Too much bodies to count. #beirutexplosion @akhbar pic.twitter.com/TYMVx0WZVo

Medical and security personnel claimed at least 30 people have been killed and over 3,000 were injured.

BREAKING – Beirut downtown is like a war zone after the explosions. Hundreds of people were injured due to the explosion. Lebanon's state-run news agency says the explosion was the result of a fire at a warehouse for firecrackers.pic.twitter.com/aBcSea2jEg

Many on Twitter are claiming that the cause of the explosion was not fireworks, but Israel targeting a Hezbollah weapons facility.

Hezbollah controls the government in Lebanon and allegedly uses that port to offload Iranian supplied weapons.

Israeli flybies over Lebanon are frequent, and residents of Beirut suspect Israel is behind the bombing. The bombing comes after a string of Israeli bombing on Damascus Syria. https://t.co/Uq022FcfZr

Massive explosion in Beirut of what could be "fireworks", but if I had to bet money on it, I would guess was a massive Hezbollah weapons consignment. https://t.co/SerRpJriHq

• Firecrackers exploded due to large and negligible production ( Al Jazeera)
• The warehouse was stored with benzene ( Al Mayeeden)
• A Hezbollah missile store was targeted near the Beirut port (Al Hadath) pic.twitter.com/zouqdvub74

Leftist nation loathing and neglect from the voters installed the enemy that is destroying from within. The squad has had a major part in the transformation of the Democrats from a bleeding heart liberal progressive party into a marxist ideology that is burning down western civilization.