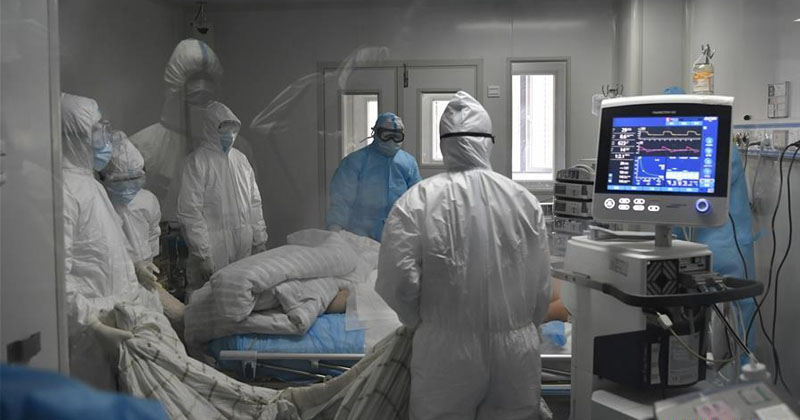 China has gone from constructing ghost cities to now erecting hospitals to treat coronavirus patients. As we’ve reported, China could be hiding the true number of confirmed cases and deaths, and in some cases, not reporting the deaths at all, and “immediately” hauling the bodies down the street to a local crematorium, effectively burning the evidence.

China is attempting to show the world, it has been proactive and responsible during the outbreak, and in one way that it can optically please everyone that it has everything under control, is to build a hospital in Wuhan, the epicenter of where the deadly virus supposedly began.

UK researchers have warned upwards of 75,000 could be infected in Wuhan, as more than 137,600 have been placed under observation across China.

While China and the World Health Organization (WHO) attempt to calm fears of a deadly virus outbreak, the actions by Beijing in locking down dozens of cities and quarantining 50 million people or more, suggest the situation remains severe.

RT News reports that Wuhan’s new 25,000-square-meter hospital, one of two new facilities commissioned in response to the coronavirus outbreak, has been completed.

Construction started on Jan. 24, has made national press and headlines across the world for China’s quick response in handling the epidemic. Though as we’ve noted before, China stalled for weeks if not a month, with minimal action in attempting to contain the virus and notify world health officials about the developing incident, hence why confirmed cases are now seen across the world.

Huoshenshan Hospital has been completed in #Wuhan on Sunday.

Allegedly, a video from inside the hospital is circulating social media channels on Sunday morning. Each room appears to be airtight, with bars on the windows so the infected patients cannot escape.

#Breaking: Just in – Video footage from inside the finished 1000 bed hospital building just outside the outskirts of #Wuhan, showing a very tough quarantine measure system to contain the #CoronaVirus in #China. And they are still building another 2 of these in the #Hubei province pic.twitter.com/fsJ7OlLAxS

If the patients die from coronavirus, state-owned Global Times said, “victims should be cremated close by and immediately. Burials or transfer of the bodies not allowed. Funerals not allowed to avoid the spread of the virus: National Health Commission.”

Bodies of #nCoV2019 victims should be cremated close by and immediately. Burials or transfer of the bodies not allowed. Funerals not allowed to avoid spread of the virus: National Health Commission (File Photo) pic.twitter.com/IsAHnuY4Rk

We pointed out Saturday that the body burning could be happening right down the street from the Wuhan hospitals, at a local crematorium.

We noted Thursday night that over 100,000 Chinese had been placed under observation for suspected coronavirus.

The virus has uncontrollably spread across China, forcing the Trump administration on Friday to restrict entry into the US from the outbreak area.

The 8th US coronavirus case was confirmed on Saturday in Massachusetts, and a suspected one is being tested in New York City.

A scientific report from Kusuma School of Biological Sciences in New Delhi proves the Coronavirus is a man-made bioweapon.