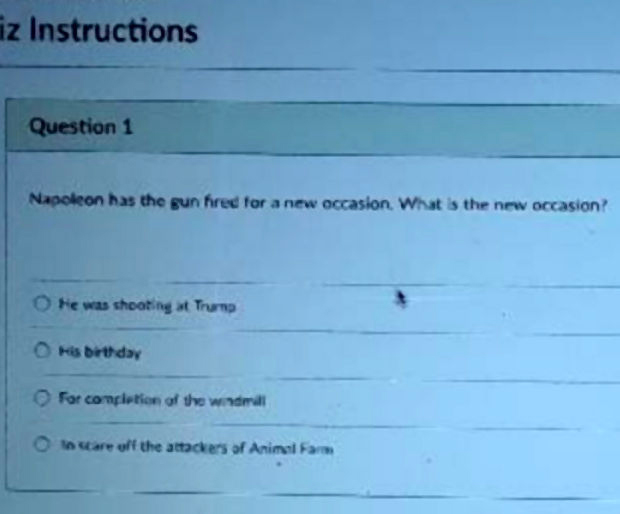 A Wyoming high school is under fire for featuring an obscene answer to a multiple choice quiz depicting the assassination of sitting US President Donald Trump.

The Teton County School District has launched an investigation into a Jackson Hole High School English quiz over George Orwell’s novel, “Animal Farm,” in which, “He was shooting at Trump,” was presented as one of various possible answers.

The father of a student at the high school says he was in disbelief when his son, Rylee McCollum, brought home a screenshot of the question.

“I had to read it two times,” Jim McCollum noted to the Jackson Hole News & Guide. “I was like, ‘Are you kidding me?'”

The question was phrased as follows: “Napoleon has the gun fired for a new occasion. What is the new occasion?”

Multiple choice answers included, “He was shooting at Trump,” “his birthday,” “for completion of the windmill” and, “to scare off the attackers of Animal Farm.”

McCollum took the issue to the school board, which launched an investigation into the quiz.

“It’s about respect for the office more than anything,” McCollum said. “That’s enough of this. No way.”

“It was so inappropriate to show a name of a sitting president in that question,” insisted McCollum. “To me, that is so wrong in light of the situation in our country and the divisiveness and all.”

On Friday the school district issued a statement announcing it was “investigating this incident”:

“TCSD #1 administration learned late yesterday that a quiz was administered to a class of high school students that contained an inappropriate answer to a multiple choice question. Administration is investigating this incident and verifying the information we have received.

“TCSD #1 takes seriously threats of any kind, regardless of the intent. We apologize to the students, families and community for this incident and will be addressing the issue with personnel.”

The parent also voiced concerns that other classes at the high school were also exhibiting a “liberal bias,” making his son, a Trump supporter, feel like “the outcast.”

“He told me, ‘Dad, they crapped on everything I believe in,'” McCollum told the News & Guide.

“Rylee is very patriotic, very supportive of our military and of our country,” McCollum said, adding that he plans to join the military following graduation if he doesn’t receive a wrestling scholarship.

“My kid is full-blooded red, white and blue.”

Rylee and his father say they’re not trying to get the teacher fired, they’re just perturbed she would clash politics and education, especially in light of the tragic events in Las Vegas last Sunday which left some 58 dead and hundreds injured.

“The Las Vegas thing still weights on us,” he said. “We are absolutely devastated. Just like any other American, we are devastated by what happened.”

The district is currently still looking into the matter.