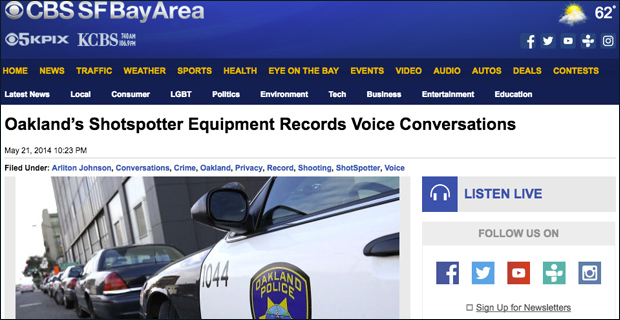 As reported by the New York Daily News, officers were lead to the location of the shooting at around 4:20 a.m. on July 10 “using the ShotSpotter system.”

ShotSpotter, an array of small acoustic microphones designed to detect and locate gunshots, has been used in the Washington D.C. area for the last decade – with hundreds of sensors currently covering one-third of the capital.

The system has been mired in controversy over its ability to record conversations – despite repeated claims of the opposite. In one such example, a conversation recorded by the system in Oakland, California, during a 2007 murder was used as evidence in court. In 2010, the device captured several frantic conversations in Palo Alto after being triggered by a small plane crash.

Given the possibility that the system could have captured more than just gunshots, Infowars reached out to the Metropolitan Police Department in Washington D.C. to ask if any other information was garnered from ShotSpotter. According to the media relations department, no information on the shooting will be given outside of official press releases.

While police have suggested that Rich may have been the victim of an attempted robbery – his watch, phone and wallet were left at the scene. Theories have since begun to circulate that Rich was connected to the leak of nearly 20,000 emails from his superiors at the DNC.

WikiLeaks, who published the DNC emails last month, drew more attention to the theory Tuesday after offering a $20,000 reward for information “leading to conviction for the murder…”

ANNOUNCE: WikiLeaks has decided to issue a US$20k reward for information leading to conviction for the murder of DNC staffer Seth Rich.

Shortly after WikiLeaks founder Julian Assange again appeared to suggest that Rich was the source during an interview on Dutch television.

“Whistle-blowers go to significant efforts to get us material and often very significant risks,” Assange said. “As a 27-year-old, works for the DNC, was shot in the back, murdered just a few weeks ago for unknown reasons as he was walking down the street in Washington.”

Wikileaks, whose website allows whistleblowers to release information without revealing their identity, published an official statement the following day that seemingly rebuked claims that Seth was verifiably the source.

“We treat threats toward any suspected source of WikiLeaks with extreme gravity,” WikiLeaks wrote. “This should not be taken to imply that Seth Rich was a source to WikiLeaks or to imply that that [sic] his murder is connected to our publications.”

Our original and only statement on the murder of US Democratic National Committee staffer Seth Rich. #DNCLeak pic.twitter.com/Qsjfyb696p

The DNC has since responded to the growing controversy by assigning Brad Bauman, a public relations manager who specializes in “crisis communications,” to represent the Rich family – only furthering theories on the death.

Bauman issued a recent statement on behalf of the family in which he asked the public to “refrain from pushing unproven and harmful theories about Seth’s murder.”

Given WikiLeaks vocal commentary on Rich’s death, theories surrounding his potential role as whistleblower are unlikely to die down anytime soon. Although technical evidence points to Russian-government involvement in the hack, multiple parties may have been responsible for exfiltrating data from DNC servers.