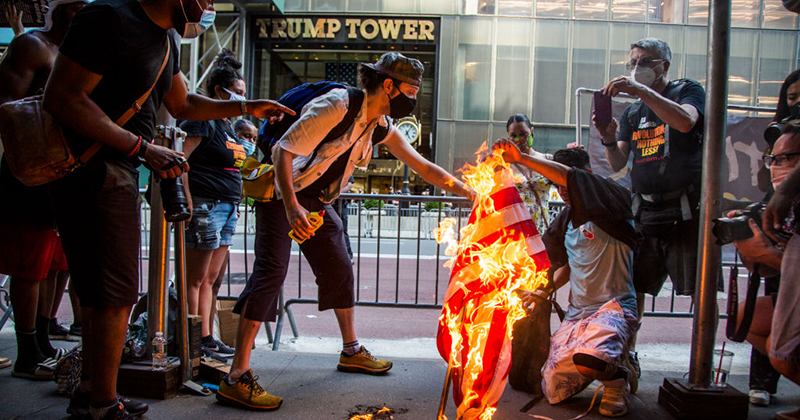 Supporters and opponents of President Trump clashed in front of his New York City residence on Fifth Avenue on Saturday just two days after a large Black Lives Matter mural was painted on the street next to the entrance.

The tense exchanges between the warring political sides came as the city and the nation continued to be roiled by protests against police brutality.

In Brooklyn, some 400 people turned out for a ‘Back the Blue’ demonstration in support of the New York Police Department, but the atmosphere grew tense after they were met by some 20 counter demonstrators carrying Black Lives Matter signs.

In Los Angeles, Black Lives Matter protesters took a knee in the middle of a downtown intersection as part of a rally in remembrance of Breonna Taylor, the 26-year-old black woman who was fatally shot in her home by Louisville police in March during a botched drug raid on her home.

In North Carolina, anti-racism protesters marched toward a courthouse in Graham demanding the removal of a Confederate statue, but they were met by angry backers of the Confederacy who want the monument to remain.

In Manhattan, about a dozen Trump supporters carrying signs that read ‘Trump 2020’ and wearing t-shirts emblazoned with the words ‘All Lives Matter’ gathered in front of Trump Tower on Saturday afternoon.

Several of them were wearing red Make America Great Again hats while wearing variations of the American flag.

A few of them unfurled a huge American flag that had the words ‘Trump’ and ‘Keep America Safe’ scrawled across the stars and stripes.