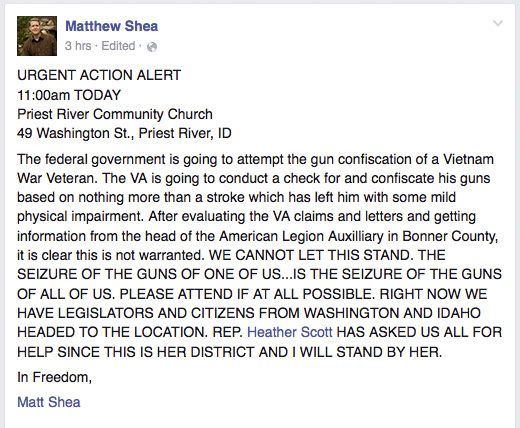 State representatives and citizens alike are descending on Idaho in an attempt to stop the Department of Veterans Affairs from confiscating the firearms of a Vietnam veteran.

Idaho State Representative Heather Scott, who first brought attention to the issue Thursday morning, stated that the veteran had issued a plea for help after the VA determined him unable to own firearms following a minor stroke.

“Based on an assessment of a letter I received, I believe that the Department of Veterans Affairs is coming to a veteran’s home in Priest River today to check for and confiscate his guns based on nothing more than a stroke which has left him with some mild physical impairment,” Scott wrote on her Facebook page.

An excerpt of the letter posted online states that the veteran is prohibited from possessing any firearms whatsoever based upon a “determination” that he is “incompetent” to handle his VA funds.

“As we advised you previously, the Brady Handgun Violence Prevention Act prohibits you from purchasing, possessing, receiving or transporting a firearm or ammunition based upon determination that you are incompetent to handle your VA funds,” the letter reportedly said. “You may be fined and/or imprisoned if you knowingly violate this law.”

Washington State Representative Matthew Shea, who traveled to Idaho after examining the letter as well, stated that the VA’s actions were clearly unwarranted.

“After evaluating the VA claims and letters and getting information from the head of the American Legion Auxilliary in Bonner County, it is clear this is not warranted,” Shea said on Facebook. “We cannot let this stand. The seizure of the guns of one of us… is the seizure of the guns for all of us.”

According to sources on the ground speaking with Infowars, the rally, which started shortly after 12 pm MDT at the Priest River Community Church, has already drawn more than 100 people from the surrounding area.

Bonner County Sheriff Daryl Wheeler also pledged to protect the veteran, arguing that he would enforce the Constitution, not “rules and regulations.”

More to come as the story develops.