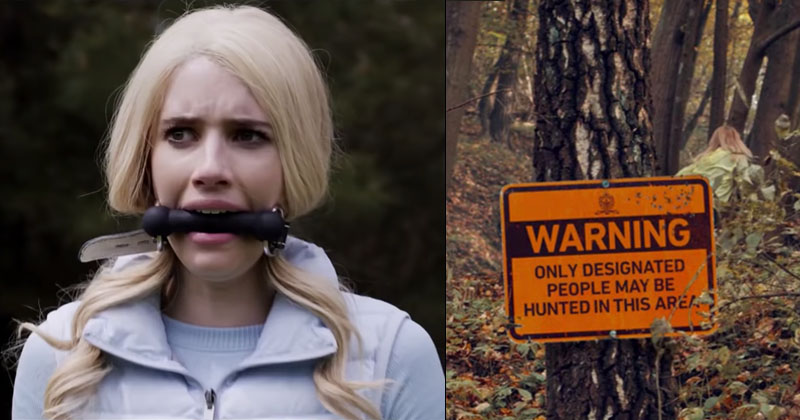 The Hunt, set for release on September 27, depicts a group of left-wing elites stalking a dozen “Deplorables” for sport.

“Did anyone see what our ratfucker-in-chief just did?” one liberal character asks in the trailer.

Another left-winger responds: “At least The Hunt’s coming up. Nothing better than going out to the Manor and slaughtering a dozen Deplorables.”

“The script for The Hunt features the red-state characters wearing trucker hats and cowboy shirts, with one bragging about owning seven guns because it’s his constitutional right,” wrote The Hollywood Reporter Tuesday.

“The blue-state characters — some equally adept with firearms — explain that they picked their targets because they expressed anti-choice positions or used the N-word on Twitter. ‘War is war,’ says one character after shoving a stiletto heel through the eye of a denim-clad hillbilly.”

The poor timing of the trailer’s release prompted several outlets to pull ads for the film in the wake of two recent shootings by right-wing and left-wing gunmen in El Paso and Dayton.

Breitbart Editor-at-Large John Nolte said the film may appear to be hardcore leftist fantasy, but the Trump supporters may actually be the protagonists.

“At first glance, the movie looks like murder-porn for leftists — wish fulfillment when it comes to killing we deplorables,” Nolte wrote Wednesday.

“The trailer, though, actually makes it look as though the deplorables are the heroes-victims, though I’m sure it will be a bit more complicated than that.”

Rep. Steve Scalise (R-La.), who was nearly killed by a pro-Bernie Sanders gunman in 2017, took to social media Tuesday to remind Americans that people shouldn’t be “targeted for their political views,” after Rep. Joaquin Castro (D-Texas) doxxed over a dozen Trump-supporting businesses on Twitter.

“People should not be personally targeted for their political views. Period,” Scalise tweeted.

People should not be personally targeted for their political views. Period. This isn’t a game. It’s dangerous, and lives are at stake. I know this firsthand. https://t.co/PbxUMIOhae

“This isn’t a game. It’s dangerous, and lives are at stake. I know this firsthand.”

Mike Adams points out the shooter was wearing trining protective gear and multiple witnesses from the shooting in El Paso claimed multiple shooters.