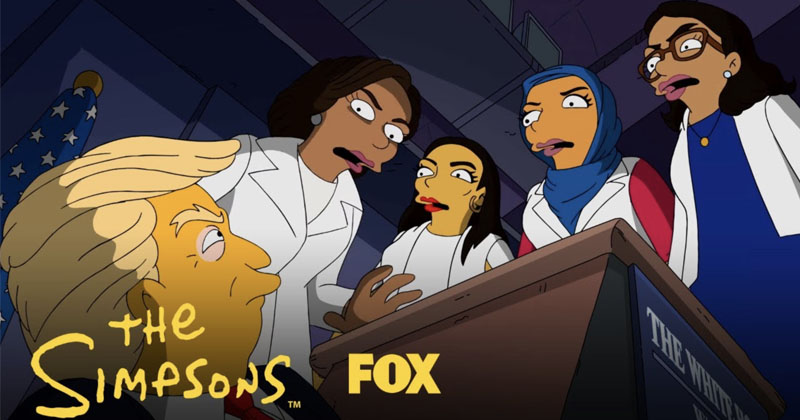 The Simpsons is receiving fierce backlash over a clip of an upcoming episode featuring The Squad taking on President Trump.

The clip shows Reps. Alexandria Ocasio-Cortez (D-N.Y.), Ilhan Omar (D-Minn.), Rashida Tlaib (D-Mich.), and Ayanna Pressley ripping into a bumbling, fumbling version of Trump and threatening to impeach him in a West Side Story-style song and dance.

Reception of the clip has been widely negative, with a negative ratio on the “Animation on FOX” YouTube account where it first appeared.

Countless comments on Twitter also shamed The Simpsons clip, lamenting that it abandoned humor for political correctness and liberal cheerleading.

Putting politics aside, this is comedy cancer. This is pure propaganda… https://t.co/nGRAtBaatx

I'm not kidding, I'm not being rhetorical. The left ruins everything they get their hands on. Divide and destroy seems to be their game plan.

I miss when comedy had to be funny

Not a fan of Trump, this is my three word review pic.twitter.com/t1ksMuAHrJ

Honestly not 100% sure who everyone is here pic.twitter.com/2HZVRBnbmD

A message from Krusty. pic.twitter.com/NSRII4xIDz

I'm not kidding, I'm not being rhetorical. The left ruins everything they get their hands on. Divide and destroy seems to be their game plan.

The freshmen congresswomen known as The Squad have been threatening to impeach Trump since they came into power in January.

The Simpsons, whose 31st season is premiering next month, was once a prescient comical show that predicted Trump’s presidency decades in advance, as well as the Disney-21st Century Fox merger and the mass of the Higgs-Boson particle.