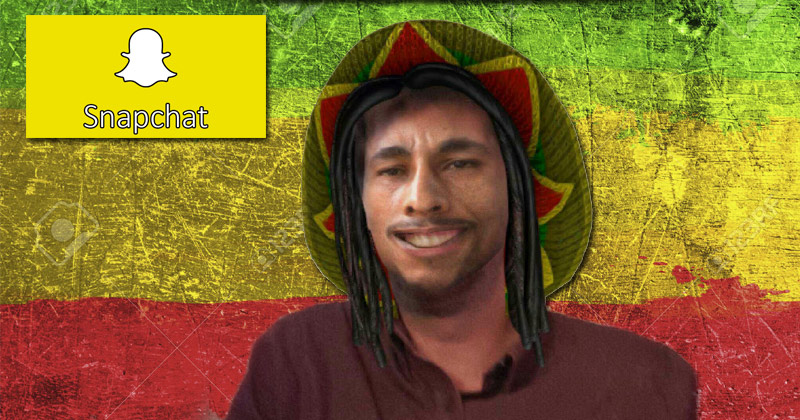 Social justice warriors are accusing Snapchat of ‘racism’ for creating a filter that turns your face into Bob Marley, despite the fact the late singer’s estate was involved in the filter’s creation.

The filter, released to honor Marley on Weed Day 2016, morphs people’s faces into the reggae icon, complete with deadlocks, a crochet slouch cap and other facial changes.

In response, leftists flooded Snapchat with accusations the app had created a “racist blackface” filter.

Happy 4/20 and Holy Shit Who Okayed This from Snapchat pic.twitter.com/NF0H2kurgv

Someone at Snapchat: "So, how do we *scale* blackface?"

So @Snapchat, every single "pretty" filter is designed to make us look White and now you're doing Blackface with a Bob Marley filter??

“Looking for a hip and also racially insensitive way to celebrate 420, the sacred marijuana holiday of people who somehow aren’t over it already? Snapchat’s here for you, with a new Bob Marley filter that gives you both dreadlocks and digital blackface,” Wired proclaimed.

But Snapchat stated the filter was intended to honor Marley’s life and “was created in partnership with the Bob Marley Estate.”

“Millions of Snapchatters have enjoyed Bob Marley’s music, and we respect his life and achievements,” Snapchat said. “[The filter] gives people a new way to share their appreciation for Bob Marley and his music.”

This whole incident demonstrates how perpetually offended SJWs will overreact to anything, no matter how trivial, to fight what they perceive as “racism,” yet their overzealous “activism” only results in an even greater racial divide than before.

“Constantly berate people if they slip up, because everybody else must be held to the same standard that you are and no other ways of thinking are ‘right,’” he added.

And that’s precisely why the establishment is fully embracing the SJW movement; when people are divided, they’re easier to control.

They can’t band together and fight their real enemy responsible for their oppression: the state.